Some women recently rescued by Nigerian troops and brought to Adamawa State have confessed that they never knew that elections have taken place in the country which lead to the defeat of President Goodluck Jonathan while being held captive by Boko Haram insurgents.

The rescued women made this known when Governor Bala Nggilari visited their Malkohi Camp where he donated relief materials including foodstuff to them.

One of the rescued victims Aisha Abbas, who thanked the military for rescuing them said that they are not aware that election had taken place in the country which led to the defeat of President Goodluck Jonathan.

Some of the women who said they have been held captive for nearly a year noted that they were subjected to inhuman treatment by the Boko Haram insurgents while others said their husband were slaughtered like rams.

Presenting the food items to the victims, Nggilari said it is the responsibility of the government to cater for the victims of insurgent attacks in order to bring succour to them.

Nggilari said that since the inception of his administration the tide has turned against the insurgents.

following the engagement of the local hunters, vigilante and the military while the plight of IDPs have remained the priority of his administration and called on the incoming administration to do same.

He added that he was also a victim of the insurgent attack having lost three family members who were murdered in his country home when the insurgents struck his home town.

In his remark, the camp coordinator National Emergency Management Agency, Sa’ad Bello said at the peak of the insurgency, about two hundred and seventy thousand IDPs were hosted across the various camps in the state.

He said out of the rescued victims, sixty nine are women while the remaining are children.

In his remarks, the Executive Secretary Adamawa State Emergency Management Agency noted that out of the rescued women and children brought to the camp, twenty two were in distress at the time of arrival and had been admitted at the Federal Medical Centre while many others were malnourished, as some of them sustained bullet wounds. 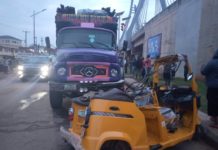