Home Features Video of U.S President’s Daughter, Malia Obama Smoking Weed at a Festival...
Share
Facebook
Twitter
Google+
Pinterest
WhatsApp
The daughter of US President, Barack Obama is facing claims she was smoking cannabis at a music festival after a video emerged of Malia Obama appearing to take a drag from a smoke stick.
In a video clip gone viral online and social media late on Wednesday, Malia Obama, the 18-year-old first daughter of United States of America President, Barrack Obama, has been caught smoking what looks like a joint (weed or marijuana) at a concert.
The 9-second video clip which was exclusively posted by Radar Online, shows the young Obama puffing away on the smoke at the Lollapalooza festival in Chicago last month where the teenager was seen in the foreground of the video dancing and sticking her tongue out. 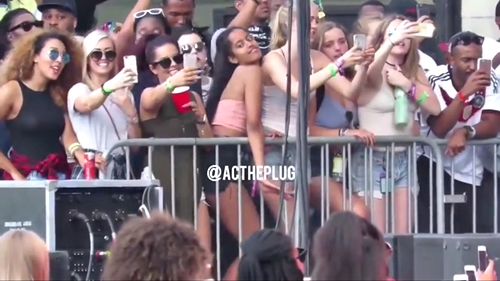 Malia pictured twerking at the festival after reportedly smoking pot
The teen girl sparked some controversy in July after she skipped out on Hillary Clinton’s historic speech at the Democratic National Convention to rock out at Lollapalooza instead where an eyewitness authoritatively claimed that Malia was smoking pot. 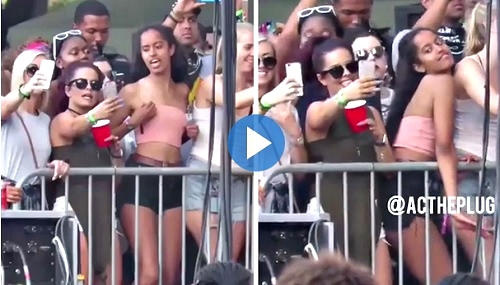 Watch the viral video below;
Culled from: http://www.tori.ng/news/37486/video-of-us-presidents-daughter-malia-obama-smokin.html