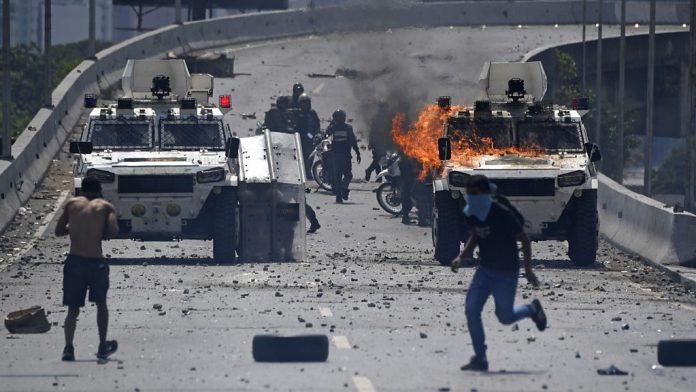 On Wednesday, both pro- and anti-government supporters held demonstrations in Caracas that were initially peaceful.

There were reports of gunfire in the city, and a local NGO, the Venezuelan Observatory of Social Conflict, said a 27-year-old woman had been shot dead during a rally in the opposition stronghold of Altamira.

At least 46 people were injured in clashes between opposition supporters and the security forces.

Opposition leader Juan Guaidó called for those responsible for the death of a 27-year-old woman to be found.

He urged public employees to act on Thursday, saying the stoppages would lead to a general strike.

Mr Guaidó in January declared himself Venezuela’s interim leader, and he has been recognized by more than 50 countries including the US, UK and most Latin America nations.

But Mr Maduro, who is backed by Russia, China and the leaders of Venezuela’s military has refused to cede power.

US Secretary of State Mike Pompeo said the US may take military action to resolve the crisis, and accused Russia and Cuba of destabilizing the country through their support for Mr Maduro.

However, Russian Foreign Minister Sergei Lavrov told Mr Pompeo that America’s influence over Venezuela was destructive and a violation of international law.

The Mexican government expressed “concern about a possible increase in violence” while Colombian President Ivan Duque urged the Venezuelan military to stand “on the right side of history” against Mr Maduro.

An emergency meeting of the Lima Group of Latin American countries has been scheduled for Friday.