AUTHORITIES have carried out more than 13,000 rescues in the Houston area as the flooding crisis in America’s fourth-largest city worsens.

The human toll continued to mount, both in deaths and in the ever-swelling number of scared people made homeless by the catastrophic storm, the remnants of downgraded Hurricane Harvey.

The city’s largest shelter was overflowing when the mayor announced plans to create space for thousands of extra people by opening two and possibly three more mega-shelters.

“We are not turning anyone away. But it does mean we need to expand our capabilities and our capacity,” Mayor Sylvester Turner said. “Relief is coming.”

The downtown Houston area before and after flooding. Pictures: Google Earth & AP

Interstate 10 at the Jefferson/Chambers county line before and after the floods. (Pictures: Google & Twitter/Dade Phelan)

The storm is now the heaviest tropical downpour in US history, with estimates that some seven million people have been impacted across the country’s south.

Meteorologists said the sprawling city would soon get a chance to dry out. When Harvey returns to land Wednesday, “it’s the end of the beginning,” National Hurricane Center meteorologist Dennis Feltgen said.

Harvey will spend much of Wednesday dropping rain on Louisiana before moving on to Arkansas, Tennessee and parts of Missouri, which could also see flooding.

But Feltgen cautioned: “We’re not done with this. There’s still an awful lot of real estate and a lot of people who are going to feel the impacts of the storm.”

Six members of a single family were feared dead after their van sank into Greens Bayou in East Houston.

A Houston hotel said one of its employees disappeared while helping about 100 guests and workers evacuate the building.

And Beaumont police say a woman has died after she and her young daughter were swept into a rain-swollen drainage canal while trying to escape their stalled vehicle.

Authorities say at least 18 people have been killed but acknowledge that fatalities from Harvey could soar once the floodwaters start to recede from one of America’s largest metropolitan centres.

A pair of 70-year-old reservoir dams that protect downtown Houston and a levee in a suburban subdivision began overflowing Tuesday, adding to the rising floodwaters. 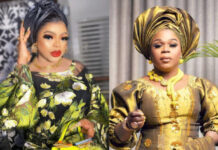 Drama as upcoming cross-dresser, Michelle Page challenges Bobrisky to a ‘no makeup’ contest