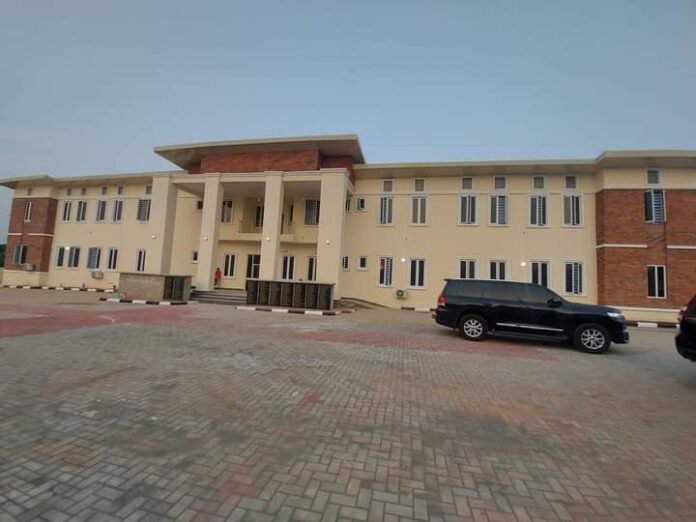 The premises of Nnamdi Azikiwe University, Awka was agog with celebrations, on Monday, as an ultramodern isolation and medical center was handed over to the University.

The project was built by Anambra Progressives Union, a group of citizens convened by the Senator representing Anambra South in the National Assembly, Dr. Patrick Ifeanyi Ubah.

The facility is adequately equipped with necessary medical equipments and top class ambulances with dedicated numbers.

Speaking at the event which took place at the University’s Medical Center Complex, the group’s convener, Senator Ubah thanked members for their support and commitment that made the project which is the second medical facility built by the group, a fulfilled vision.

He also thanked the management of the University for their cooperation, explaining that he was moved to call on Anambra billionaires to assist the state upgrade its health system, after the nation started facing challenges caused by the novel Corona Virus.

“This is the second medical facility completely built by the Progressives. The first facility is situated at Nnamdi Azikiwe University Teaching Hospital Permanent Site, Nnewi-Oraifite. It is important to explain that the group chose Nnamdi Azikiwe University Teaching Hospital and its main campus as locations of the facilities, after considering various factors that will ensure their adequate maintenance,” he said.

The Anambra South Senator further revealed that a similar project was planned to be located at Nwafor Orizu College of Education Nsugbe but unfortunately, the state government frustrated the efforts.

He however, told Anambra North residents not to feel abandoned as plans are already on the way to work with the church to make the vision a reality in their region.

Narrating other visions of the Progressives, the Senator maintained that efforts are already in place to establish industries with staff residential apartments and Inland terminal in order to provide employments and boost the economy.

Responding on behalf of the University’s Management, the Vice-Chancellor Professor Charles Esimone, commended Senator Ubah for making the giant move.

He also appreciated the Progressives for thinking back home to do what they have done and urged them not to relent in their efforts to bring succor to people of the state.

Prof. Esimone further maintained that the timely completion of the facility has confirmed that unity towards a common goal pays.

“I am highly impressed because this facility is not only beautiful but highly equipped to the extent that whoever stays in it will feel at home and may not want to come out. Members of the University’s Governing Council were marveled at the speed of work when they visited the facility as it was completed within a period of ten months. What I will assure you on behalf of the University’s Management is that the facility will be adequately maintained,” Esimone assured.

Also speaking, the Chairman of the Anambra Progressives in Diaspora, Barrister Peter Nwosu commended Senator Ubah for convening the group and appreciated his fellow Progressives for their selfless and endless supports that made the facility a fulfilled vision.