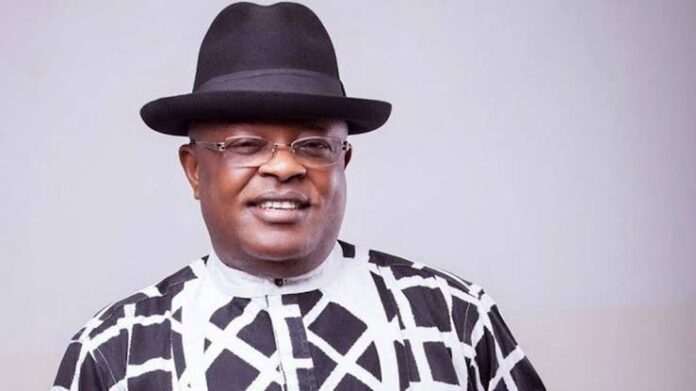 The former representative of Ishielu/Ezza North Federal constituency Hon. Peter Edeh has said that Governor David Umahi did not sin by planning to defect to the All Progressive Congress (APC).

The ex-lawmaker made this known while interacting with newsmen in Abakaliki, Ebonyi State capital.

Edeh who was a former commissioner in the state under PDP government but joined the APC in 2017 said the defection of the governor to APC will end all factions in the party.

According to him: “We believe that the governor has clout and support in politics. We expected that his coming to APC will boost our chances of taking over Ebonyi State in the next elections. We welcome him with open hands.

“It will be pretty obvious that if a serving governor joins a political party under normal conventions and protocols, he becomes the leader of APC in the state. If you have an accepted leader, it is normal that all factions will die off naturally.

“For me, all the factions in Ebonyi APC will end and I don’t foresee any further problems or factions that will cause us forthcoming election in the state.

The governor can’t be a liability to APC as was alleged by my friend Teeje Yusuf, I know him very well he is a sharp guy but I think that people from his area are given to jesting.

“I don’t see how Umahi joining APC is a liability. I think it is a big bonus for us. Yusuf is probably jealous of that.

“There are only very few people in Ebonyi APC that have not been in PDP before. I was in PDP from 1999 to 2007; I was equally a commissioner in PDP. I left there for APC. Almost every member of APC in Ebonyi was once a member of PDP. I don’t think that the governor’s case is different.

“When we were trying to formulate the name of the new APC, anyway I was a member of the merger committee that formulated APC. We deliberately selected ‘A’ from ANPP; we selected ‘P’ from CPC and ‘C’ from Action Congress, AC. These were the three legacy parties. The political foundation of governor Umahi is APP and so, coming to APC is like coming home,” he noted.