The ownership of the UFC is reportedly changing hands.

TMZ Sports first reported WME/IMG bought the company for around $4 billion and the WME/IMG confirmed its purchase on Monday morning, via ESPN.com’s Darren Rovell. 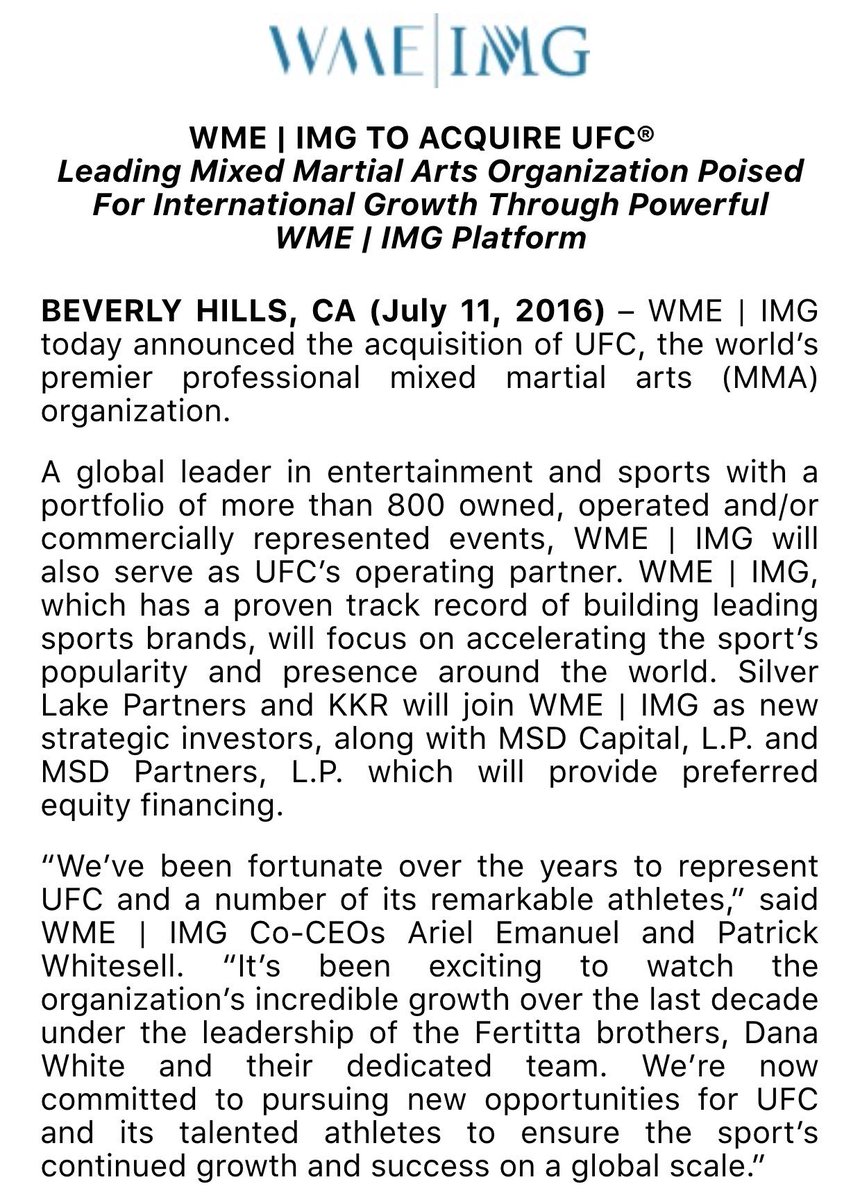 According to the New York Times‘ Michael J. de la Merced, WME/IMG will be the main investor along with private equity firms Silver Lake and Kohlberg Kravis Roberts and an investment firm belonging to Michael S. Dell.

TMZ reported UFC CEO Lorenzo Fertitta will step down from his post and retain a minority stake, while Dana White will stay on as president.

Shortly after the news broke, White sent out this tweet:

White described the sale as “very” bittersweet, per ESPN.com’s Brett Okamoto. He also told Okamoto mixed martial arts “is going to the next level” with WME/IMG on board.

Rumors of the UFC’s sale have been swirling for months. In May, Rovell reported four or more bidders were vying to make the best offer. Rovell listed WME/IMG, the Blackstone Group, China Media Capital and Dalian Wanda Group among the strongest contenders and noted theasking price was likely to be between $3.5 billion and $4 billion.

The sale represents a massive return on the Fertitta brothers’ investment. De la Merced noted they purchased the UFC for $2 million in 2000. Since then, both the company and the sport have grown exponentially.

Along with a packed calendar of pay-per-views, the UFC earns millions of dollars from broadcasting and sponsorship rights along with revenue from its on-demand UFC Fight Pass service.

Upon taking over, WME/IMG will have to deal with a few notable issues as the UFC’s owners.

Some fans believe the company’s decision to run a higher volume of events than it did years ago has watered down the product. Reebok’sexclusive apparel deal and Conor McGregor’s recent standoff with the UFC also highlighted problems with fighters’ pay structure.

Any changes WME/IMG plans to make to the product are unlikely to be immediate. The deal between the Fertittas and WME/IMG could take anywhere from six weeks to two months to become official, per TMZ.