A handwritten letter by late rapper, Tupac Shakur, which he wrote while he was in prison at New York’s Clinton Correctional Facility in 1995 has been sold recently for $172,725. The four-page letter was addressed to former Death Row Records employee Nina Bhadreshwar to be published for the youth to read..
The title of the letter was: “Is Thug Life Dead?” Then part of the body of the letter read:

“I did not begin thug life, I just personified it,” the letter reads. “I couldn’t stop it if I tried but in my heart the thug n—- has advanced 2 be a Boss Playa.

So No Thug Life is Not Dead but in my heart it is. If U are sharp u will learn from this.”

“I want all my homeiez 2 realize there is another level it takes heart and courage 2 stand alone face the demons and make a change! We are powerful people but not unless we have power and if we all die we have nothing. No power, no money, no life, nothing.”

“A regular Playa plays women. A Boss Playa plays life. A Boss Playa is a thinker, a leader, a builder, a moneymaker, a souljah, a teacher and most of all, a Man! I want all my homiez to know there is another level.”

To read the full letter, go to goldinauctions.com.

The sold item also contains the torn envelope from which contained the letter and a signed letter of Authenticity from Nina Bhadreshwar the owner of the rare collectible. 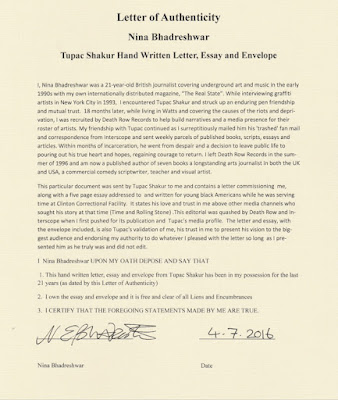 The letter was sold to an unidentified bidder at online auction website, goldinauctions.com.