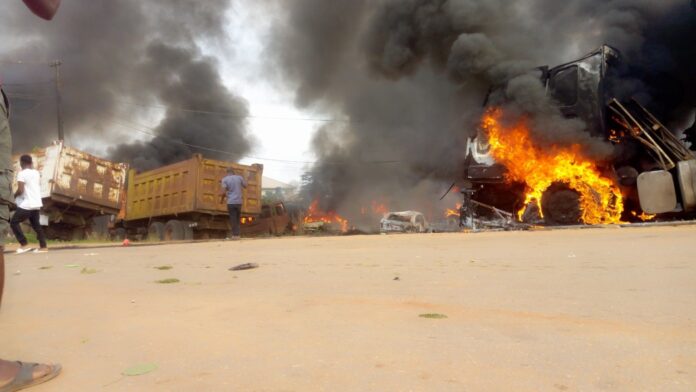 Protesters in Benin City, the Edo State capital, who are demanding an end to police brutality, corruption and impunity, are not making movements in and out of the city easy as they block roads with a bonfire.

As early as 7am, the protesters on Sunday, the protesters took over the Benin By-pass, causing huge traffic gridlock. Motorists had to burn fuel and longer hours searching for alternative routes.

Generally, internal roads in Benin are very bad. Scores of keke operators who tried to ferry anxious travelers across rivers that have taken over most of the streets, ended up empting their passengers on the flood water.

But, four of the protesters on Sunday were sent to their early graves when a Sport Utility Vehicle ran into those who slept on the road on Saturday night. Four other protesters sustained serious injuries, and were rushed to the state Specialist Hospital for treatment.

Before this tragic development, the Nigeria Police, Ekiti State Command described as barbaric and wicked, an attack on some police facilities by EndSARS protesters in the state on Saturday. The protesters were said to have set bonfire on the road and slept beside it, when the vehicle ran into them.

The tragic incident, however, occurred along 2nd East Circular Road, by Uwa Junction. The driver of the SUV was said to have abandoned it at the spot and fled from the scene of the incident.

Spokesman state police command, Chidi Nwabuzor, a Superintendent of Police, was not immediately available for comments. As early as 7am on Sunday morning, the entire city was engulfed in chaos as protesters crippled major roads with bonfire.

While all strategic points into the city were blocked, causing untold hardship to travellers who have to connect their various routes through the city, intracity transportation was also halted, causing commuters much agony, as they have to walk long distances to their respective destinations.

The ever-busy Benin/Abuja highway was blocked after the by-pass, while Benin/Agbor road was blocked at Police road Junction.

Other places like Agbor Park, Rammat Park, Okhoro road and Medical Store road junctions were also blocked with bonfires by the protesters. The Ugbowo axis of the city and Ekehuan road were also not left out.

In the mean time, Ekiti Police Public Relations Officer, Sunday Abutu, in a statement confirmed that properties worth millions of naira were damaged by some youths during the attack.

‘’The Commissioner of Police, Tunde Mobayo, is disappointed and unhappy with the action of the protesters’’, Abutu said, pointing out that the Ikere Police Area Command as well as the Ikere Divisional Police Headquarters, as facilities destroyed by the protesters.

”The command implore parents, guardians and all stakeholders to warn their wards to refrain from engaging in any form of violent protest, or act that could alter the peace of our dear society. On Saturday, October 17, a group of hoodlums in their large numbers, in the name of protest, went wild and attacked Ikere Area Command as well as Ikere Divisional Police Headquarters, destroying items worth millions of naira in the process.

”The CP Tunde Mobayo, however condemns such attack on police properties and innocent citizens, noting that the attack could be described as barbaric, wicked and uncalled-for. The commissioner hereby enjoins those who wish to protest to be more organised in a way that should not affect the rights of other members of the society. They should be peaceful and should not give room for miscreants to hijack such peaceful protest”, the statement said.