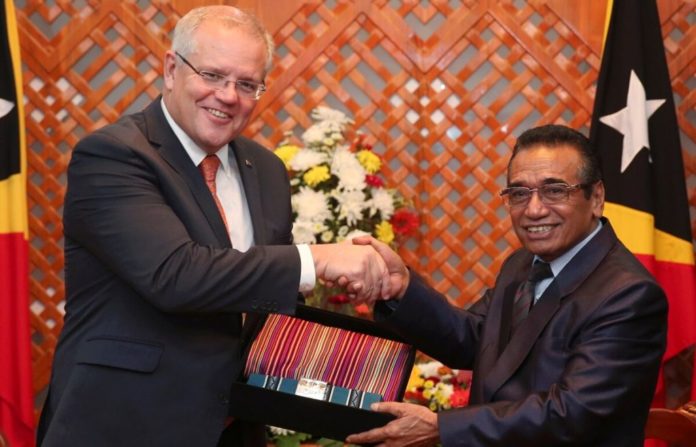 Cringeworthy, a touch molesting in sentiment: this was the celebratory occasion of the gathering of Australian Prime Minister Scott Morrison with his East Timorese counterparts. During the course of its history, the state has been pillaged and bombed, its residents massacred and its politicians spied upon. The exposure of that seedy little matter of espionage came in December 2013, when it was revealed that an Australian intelligence officer known as Witness K had spilled the beans on how his masters were attempting to undercut the East Timorese in their 2004 negotiations for a maritime boundary. The Australian delegation had eyes on underwater oil and gas revenue; nothing would be left to chance.

Because of such cheery sentiment, the cabinet offices of the East Timorese were bugged by agents of the Australian Secret Intelligence Service (ASIS). “It was outrageous,” recalled the lead negotiator on behalf of the East Timorese, the seasoned US diplomat Peter Galbraith. “I’d taken protective measures against Australian espionage, which I thought would be based on cell phones and the internet, but I thought it was pretty crude to be bugging the prime minister’s offices.” In Galbraith’s view, Australian politicians had been accessories to corporate greed (a condition familiar to the US political classes).

Witness K initially took the matter to the Inspector General of Intelligence and Security and obtained approval to consult Bernard Collaery, barrister and former attorney general of the Australian Capital Territory. This put into motion an effort, led by Collaery, to challenge the validity of the treaty, which had granted the Australians a distinctly generous equal share of the revenue.

The revelations also armed East Timor with modest ammunition to trigger the UN conciliation process, retrospectively praised by embarrassed Australian politicians as revolutionary. Deemed heroes by former Timor-Leste president José Ramos-Horta for their “conscience and courage”, both Witness K and Collaery have been prosecuted in the finest traditions of the Australian national security state: those two will forever be associated with foiling Australian efforts of corporate plunder.

The bugging affair was merely symptomatic of a broader sociopathic tendency shown towards the territory. The intervention of an Australian-led force in September 1999 has been taken as a cathartic act of history. But the muse of history tells a different story. Australia was deeply reluctant to send forces, taking issue with a prevailing view in some circles of the US State Department that something should be done. Foreign Minister Alexander Downer was keen to avoid agitating Indonesia, despite the murderous antics of pro-Jakarta supporters running riot in the aftermath of the independence referendum.

When such reluctance was reported in the Sunday Age on August 1, 1999. Downer saw off such claims, which involved a said meeting between Ashton Calvert, head of the Department of Trade and Foreign Affairs, and Stanley Roth, US assistant secretary of state for East Asia and Pacific Affairs, as “completely false”. Roth, it transpired, felt the need for an international presence to arrest escalating violence. Downer preferred another approach: plugging leaks and concealing Australia’s role in rejecting US offers for a coordinated deployment in East Timor.

The fear of precipitating showers of Indonesian indignation was not new. In 1975, Prime Minister Gough Whitlam, lionised by the Australian Labour Party as a doyen of progressive enlightenment, gave the nod to Indonesia’s bloodthirsty president Suharto that the territory could be annexed without much fuss. While it was never for Australia to agree or disagree with the expansionist move, the bend-over-backwards assurance was needlessly ingratiating, assisted by the paternalistic view that an independent East Timor was simply not viable, politically or economically. Whitlam would subsequently reassure himself that the Indonesian military might have been benevolent occupiers, a spectacularly foolish assumption.

Now, Australia has expressed undying fraternal support, loftily insisting it was generous in letting an impoverished Timor-Leste receive a 70 per cent share of future revenue from the Great Sunrise gas-field. In Dili to ratify a new maritime boundary treaty with East Timor’s Taur Matan Ruak, not all was calm in the ceremonial mood. East Timor prefers processing the gas for export in Dili; the Australians and project developer Woodside have opted for a more self-beneficial floating platform.

Nor has the Morrison government been open to suggestions that Australia compensates Dili for billions of dollars obtained in gas royalties under the previous maritime border agreement. “What we have been doing in the last 20 years,” deflected Morrison, “has been investing as the principal development partner in Timor-Leste. Australia has invested some $1.7 billon directly through our various programs and we continue to invest now over $100 million.” Never you mind that this is dwarfed by the $5 billion amount being suggested to right the imbalance.

Whether it is natural resources or the matter of regional security, Timor-Leste has again made a mark on Canberra’s radar. The usual culprits insisting on Australian rough riding in the region have come out with blazing enthusiasm. Such places require Canberra’s attention lest the devil that is Beijing creep up on Australia’s interests. “While Australia has been focused on the Pacific ‘step-up’,” writes The Australian, “East Timor had until recently dropped off the radar.” The views of former Victorian premier Steve Bracks, are noted in the paper. “Every time I go to Timor now I see Chinese delegations. I don’t see any Australians.”

The neo-colonial footprint has been easing off, leaving the strategists worried. It was left to Morrison and his foreign minister, Marise Payne, to announce what was advertised as a “new maritime security package” featuring the gifting of two patrol boats from Australia in 2023 and funding to modernise a current naval base. A promise to back an underwater fibre optic cable, intended to connect Timor-Leste to the North-West Cable System between Darwin and Port Headland, was also thrown in. If wise heads prevail in Dili, money and investment from both Australian and Chinese sources will be pouring in. Juggling their influences would be a fitting rebuke to the marked callousness that has characterised Australian foreign policy.