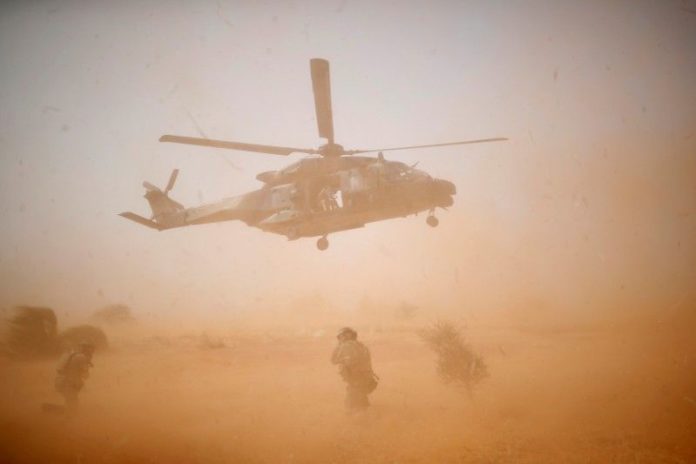 Thirteen French soldiers fighting jihadists in Mali were killed in an accident between two helicopters, the French presidency said on Tuesday, the single biggest loss of French troops in combat in the region since intervening there in 2013.

France has a 4,500-strong Barkhane force countering Islamist insurgencies in the Sahel region, where violence by militants linked to al Qaeda and Islamic State in the sparely-populated area has proliferated in recent years.

“The president announces with deep sadness the death of 13 French troops in Mali on the evening of Nov. 25, in an accident between their two helicopters during a combat mission against jihadists,” the statement from the president’s office said.

The circumstances surrounding the accident were not immediately clear. France’s Armed Forces Minister Florence Parly said the incident occurred while the helicopters were in flight.

The Defence Ministry said the helicopters involved were a Tiger and Cougar and the operation took place in central Mali.

“They were supporting commandos from the Barkhane force who were engaged with armed terrorists,” the ministry said in a statement.

France, the former colonial power in the region, intervened in Mali six years ago to drive out Islamist militants who had occupied the north and still use swathes of the country as a launch pad for attacks across the largely desert region.

Paris has since kept troops in the region as part of Barkhane counter-terrorism operations, while western powers have provided funding to a regional force made up of soldiers from Mali, Niger, Burkina Faso, Chad and Mauritania.

France has been frustrated that it is taking the brunt of operations on the ground, although other European countries have provided logistical support, trainers and some special forces.

By reinforcing African forces, Paris sees an eventual exit strategy for what is its biggest foreign deployment, diplomats say.

Monday’s deaths brings the total number of French soldiers killed in the Sahel to 28.