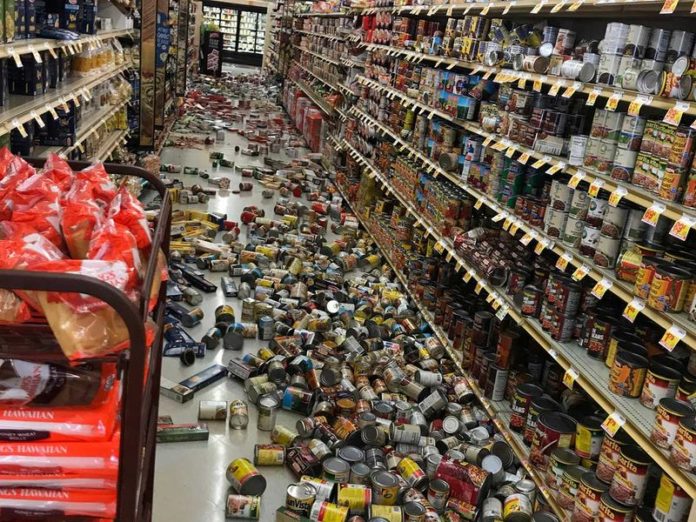 Southern California was rattled by its largest earthquake in two decades late Friday, a 7.1-magnitude tremor that shook buildings and cut power supplies in parts of Los Angeles but did not cause major damage or deaths, officials said.

The shallow quake struck near the small city of Ridgecrest at 8:19 pm (0319 GMT Saturday), US seismologists said, and follows a 6.4-magnitude quake that hit the same area the day before.

The latest quake was 11 times stronger than the previous day’s “foreshock”, according to the United States Geological Survey, and is part of what seismologists are calling an “earthquake sequence”.

The tremor was felt more than 150 miles (240 kilometers) away in Los Angeles, where the fire department deployed vehicles and helicopters to check on damage and residents in need of emergency aid.

The earthquake was the largest in southern California since 1999 when a 7.1-magnitude quake struck the Twentynine Palms Marine Corps base, according to The Los Angeles Times.

“We have word of wires down… and *localized* power outages in several City of Los Angeles neighborhoods… besides a handful of apparently small issues, NO major damage to infrastructure has been identified,” the Los Angeles Fire Department tweeted.

The department later released a statement saying that its ground and air survey had found “no major infrastructure damage”.

“There has been no loss of life or serious injury that we can directly attribute to the widely felt 8:19 PM earthquake,” LAFD spokesman Brian Humphrey said in the statement.

The San Bernardino Fire Department tweeted that officers in the city east of Los Angeles were dealing with 911 calls, including one reported minor injury.

LA police chief Michael Moore posted on his official Twitter account that rail and bus services were not damaged, and that services were still working.

The tremor sent Ridgecrest residents fleeing outside for safety and reporting continued aftershocks, with one woman saying she was “not comfortable” about heading back inside for the night.

The shaking stops “for a minute, and then it starts rolling again… it’s pretty bizarre. But now at the moment, I’m not comfortable inside,” said Jessica Kormelink.

The quake revived fears of the “Big One” — a powerful tremor along the San Andreas Fault that could devastate major cities in southern California.

On Thursday, Caltech seismologist Lucy Jones had warned a press conference that there was “about a one-in-20 chance that this location will be having an even bigger earthquake within the next few days, that we have not yet seen the biggest earthquake of the sequence.”

On Friday, Jones tweeted: “You know we say we 1 in 20 chance that an earthquake will be followed by something bigger? This is that 1 in 20 time.”