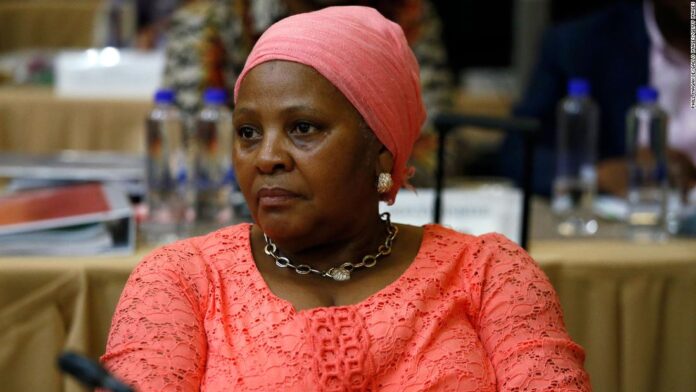 The South African government has docked the defence minister’s salary for allowing members of the ruling party to join her on an official trip, according to the country’s presidency.

Nosiviwe Mapisa-Nqakula flew with some members of the African National Congress (ANC) to Zimbabwe while on an official diplomatic visit using an aircraft belonging to the country’s air force.

The government says Mapisa-Nqakula, who heads the Ministry of Defense and Military Veterans, misused state resources because of her “error of judgment” and docked her salary for three months starting next month.

Nosiviwe Mapisa-Nqakula looks on during a cabinet meeting January 29, 2020, in Pretoria, South Africa.

Mapisa-Nqakula didn’t act “in the best interest of good governance” and “acted in a way that is inconsistent with (her) position,” a statement from the presidency said.

Her salary for the three months will instead go into a fund supporting the country’s response to the coronavirus pandemic.

There is a growing pressure from the opposition for Mapisa-Nqakula to step down despite the ANC promising to pay back the costs in excess of her approved budget for the trip.

“We travelled in an unusual manner,” the ANC said in a statement, “and will reimburse the government for the costs incurred on behalf of our delegation.”

One opposition party, the Democratic Alliance, says the government should have given the minister a stiffer penalty.

The ANC has been the country’s leading political party since the 1994 election that marked the end of apartheid.

But it has also faced criticism for its poor handling of the economy, a situation Cyril Ramaphosa promised to address when he became president in 2018.