Awka – Unknown gunmen on Wednesday, invaded Isuofia Town Hall, where Professor Chukwuma Soludo, a gubernatorial aspirant on the platform of the All Progressives Grand Alliance (APGA) was holding a meeting with Isuofia youths.

Soludo is an indigene of Isuofia in Aguata Council Area of Anambra State and was said to be discussing strategies with the Community’s youths on how they will support his electioneering campaigns. 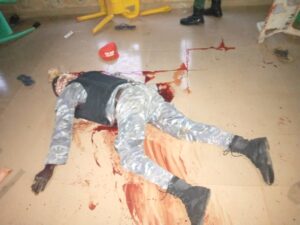 A source at the scene who is a member of All Soludo Support Group confirmed to TNC correspondent, that Soludo was at the meeting when the gunmen invaded.

According to the source,  the meeting was progressing as planned until the gunmen arrived, opened fire on the operatives and afterwards, collected their guns.

On the whereabout of Professor Soludo, the source confided with our correspondent that the former Governor of Central Bank of Nigeria is in a safe place at the moment.

The source revealed that three mobile policemen were killed on the spot by the gunmen, and the State Commissioner for Public Utilities, Emeka Ezenwanne, allegedly whisked away by the gunmen.

Meanwhile, when contacted, Anambra Police Command said they have received report of the incident, and will issue a statement shortly.

No group has claimed responsibility for the horrific action.

TNC as at the time of filing this report, could not immediately ascertain if the attack was politically motivated, or if it could be linked to the past weeks’ incidents that have seen unknown gunmen attack and kill security personnel in Anambra state, and in other states in the South East.