Horror, tears as an eight-year-old boy who was tragically killed after being swallowed by a crocodile while swimming in a river with his little brother has been cut from the 26ft crocodile.

According to the Mirror, the boy’s dad desperately chased the animal and reportedly punched it with his bare hands but the predator wasn’t caught till the next day, a search and rescue official said.

It was revealed that the child was attacked in Indonesia’s East Kalimantan province and swam in a river known to be a crocodile habitat. 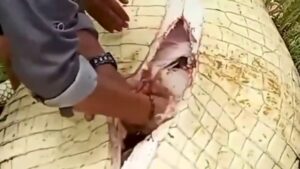 The report also disclosed that the six-metre crocodile was then found by locals and cut open on March 4, the Australian Associated Press reports.

It added that the family wept as disturbing footage shows the child’s body being pulled from the crocodile’s tummy.

The search and rescue official said the family “went to the river often to bathe and get water for cooking”.

It would be recalled that in 2018, Indonesian villagers armed with knives, hammers and clubs slaughtered 292 crocodiles in revenge for the death of a man killed by a crocodile at a breeding farm, Reuters reported.