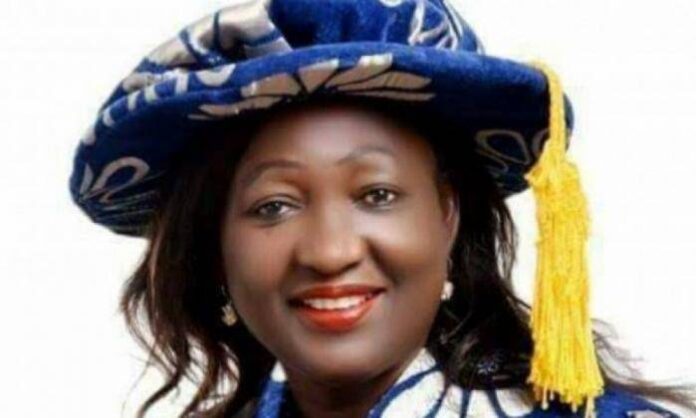 A putrefying stench of corruption is currently polluting the University of Calabar (UniCal) in Cross River State capital. It a seeming desperate bid to arrest the spread of the epidemic, management of the university has suspended its Bursar, Mrs Beatrice Igwe, for alleged financial misconduct.

This is coming baring four weeks after 11th Vice Chancellor of the institution, Professor Florence Banku Obi, at her investiture speech this December 1, tagged the university a cesspool of corruption and avarice.

Obi said the university is having a reputational problem orchestrated by what she called the ‘’ugly spectre of a moral eclipse, under the gloomy climate of unbridled desire for immediate gratification, quick wealth, mediocrity and compromise of academic standards, sexual harassment, employment, admission and hostel racketeering”

These vices, according to her, have indisputably stained the hard-earned reputation of the university which the entire community had collectively laboured to build over time, pointing out that she was committed to waging the war against corruption which she said was cardinal to the recovery of the soul and values of the university system.

” I am committed to putting in place robust strategies to prosecute this war, part of which shall include establishing a framework to protect the integrity of examinations and results, reinforcing the whistle-blowing system and introducing student assessment of lecturers” she said.

In her unwavering commitment to zero tolerance for corruption, a new code of ethics for staff and students for information and guidance, collaboration with anti-graft agencies will be introduced, including a raft of other measures to apprehend and discipline culprits according to the law.

“As a psychologist, I am not oblivious of the fact that human beings are unpredictable, capricious and shady in character most of the time…I have garnered the experience, exposure, training, administrative skills to help me cope with situations and people’’, she said, and pledged to dedicate herself wholly and completely to the ‘onerous duty of pragmatic leadership, tough choices and sacrifices.’

For her, accountability, transparency, truth and courage are her watchwords and solicited for support and encouragement, by the way of advice or constructive criticism, in order tp enable her vision of the university materialize.

She regretted that contrary to exemplary university ethos, sycophancy and rumour mongering have assumed a larger-than-life character portending a grave danger to the soul of the institution.

The former Deputy Vice Chancellor Academic lamented that the university has witnessed the corrosive dimensions of rumour mill, flattery and lies, much of which have destroyed relationships, undermined confidence and affected the quality of academic governance and governance.

“I want to state categorically and without mincing words that my administration will not tolerate sycophants, rumour mongers and peddlers of lies, as they are antithetical to the culture of excellence.

Obi, the first female vice chancellor, to preside over the 45 years old institution, stated that she is on a historic mission to do things differently from a new perspective, in order to reposition the institution.

She reiterated her vision during the campaign for the Vice Chancellorship, to ‘ re-position the university in line with global best practices to a foremost ivory tower for the blossoming of quality teaching and learning, research and community service, towards the production of quality graduates.”

In the mean time, she has approved the appointment of Mrs Atim Mensah, as the Acting Bursar of the institution.

UniCal’s Registrar, Gabriel Egbe, in a statement says:”The appointment of the acting Bursar follows the suspension of the incumbent Bursar, Mrs Beatrice Igwe for alleged misconduct currently being investigated in council.

“Mrs Atim Mensah, whose appointment took effect from December 22, 2020, is expected to be responsible to the Vice Chancellor for the day-to-day administration and control of the university.”

Egbe also disclosed that six new directorates have been created in the University Bursary by the vice chancellor, pointing out that the re-organisation of the bursary is in line with the Governing Council’s directive to unbundle the apex finance department for efficient service delivery.

The newly created directorates and their heads, includes Budget, Planning and Control under the Leadership of Joseph Odu; Procurement and Supply, Joseph Egbenta; Staff and Management Services, Paul Agbor; and Final Accounts headed by Clement Otogo.

Others are Treasury/Fund Management and Bursar’s office which will be led by two acting Directors, Mrs Stella Ndukwe and Clment Bassey.

Mrs Iqwe’s removal is as a result of the power tussle between the new vice chancellor and immediate past big boss of the university, Prof Zana Akapgu.

Loyalists of the two fighting scholars which include the Bursar and Registrar have been engaging in a silent war since the emergence of Prof Obi.

The incumbent vice chancellor was piqued by the roles the two principal officers were playing during the campaigns that brought her into office. Mrs Iqwe and Egbe were allegedly opposed to Prof Obi’s candidature for the top job.

It was an open secret that Zana rooted for Ayara and did everything possible to install his surrogate, but for the higher power-play by Prof Obi’s hatchet men who had outwitted them and maneuvered every other contestant to clinch the coveted seat on September 10, 2020.

Insiders say there are some mind-boggling revelations with regard to financial mismanagement involving the bursar and the out-gone VC, Akpagu, including alleged illegal awards of contracts running into hundreds of millions of naira to their connies; illegal acquisition of property within and outside the state, operating illegal accounts against all university financial regulations, jobs and admission racketeering.

The suspended bursar was allegedly fond of not paying entitlements and other approvals to ASUU members and those not in their good books and was rather paying her relatives and those close to her former “Oga Zana” to curry favour.