A housewife Onyinyechi Anamelechi has called on the new Inspector General of Police,Mr. Solomon Arase to investigate the Special Anti-Robbery Squad Officers (SARS) attached to the Lagos State Police Command for an alleged illegal detention and  torture of her family following an allegation of armed robbery leveled against her husband Victor Anamelechi.

Mrs. Anamelechi stated that trouble started for her and her family on December 15th 2014 when SARS officers from the Lagos State police command stormed her ,home and whisked herself ,her husband and her three children away.

She started further that she was kept in SARS Cell with her children for weeks where she was allegedly tortured and her children made to go through dehumanising treatment despite the fact that they are minors.

Narrating her ordeal she said. “I was at home with my  children and some relations at-Bashorun Ogundairo Estate, Waterside, off Ago Road, Amuwo, Lagos n Monday, 15th December 2014 when three armed policemen in mufti stormed  our house with my husband Victor, whom they had arrested on his way out and handcuffed.I asked who they were and they told me that  they were  policemen  from SARS Ikeja. They were  led by one Sergeant Abduraman.

They started asking ‘where is the money, where is the money!’ I was terrified and  could not answer them.  One of the policemen hit me  so hard on the face and I fell down. They started searching the entire house inside-out, taking with them every kobo they found in the house, including jewelries, documents, credentials, motor particulars, land documents and other valuables. When they were done,they dragged me ,my husband and our two little children, one aged 5 and the other just above 1 year into their vehicle. They also arrested my brother and my course mate, who visited us .

The SARS men forcefully took my husband’s little dog and his two cars, Acura MDX and Toyota Corrola Verso;as soon as we got to SARS,we were taken to the torture chamber where the policemen accused my husband of armed robbery and subjected him to a long and grueling torture in my  presence.  My children, were also made to watch as the SARS men beat their father. They kept demanding  to know where he hid the money.  At a point, Sergeant Abdulraman pointed a gun on my 5-year-old son, Daniel and threatened to shoot him if my husband refused to tell them where he kept money.

He was forced to tell them that he had money in GTB, Amuwo -Odofin branch but  they continued to torture him until he fainted. I was weeping and begging them to stop. Then one of the policemen turned to me and kicked me from all sides, demanding to know my  husband’s other bank accounts. I  said I  did not know and begged them to leave me alone because I was pregnant.The  policemen did not listen to my pleas as they stripped me naked in the presence of everyone there and continued to ask for bank accounts”.

The mother of two in her narration,further stated that the SARS officers continued their torture the next day even as she informed them that she was unaware of her husband’s business transactions and she eventually had a miscarriage.

“On the second night of the detention, I had a miscarriage in the cell and the whole place was filled with blood. I was left in that condition and for three days I and the children did not taste any food but the SARS officers on  three different occasions led by Sergeant Abdulraman took my husband  Victor to his bank branch at GTB,  and forced him to withdraw a total of N7.7Million and handed over to them.On the night of 29th December,my children’s crying  attracted the attention of a senior police officer at SARS who came to the cell and ordered that I and the children should be released immediately. We  were released on 30th December 2014, after two weeks and two days in SARS detention”

Mrs. Anamelechi further revealed that prior to her release the SARS officers stormed her house and further ransacked everywhere.

She said ” I had taken permission from one of the SARS team members called Hassan to go home and collect some clothes for my  children to use in the cell. I  was accompanied by my  brother-in-law, Mike, and while at home, a squad of 8 heavily armed policemen, led by the same Sergeant Abdulraman again stormed the house with three vehicles, and descended heavily on me  and Mike.

Sergeant Abudulraman and his men removed all the furniture, fittings and household items from the house and carted them away in their vehicles. They destroyed other house fittings which they could not remove. They also confiscated my  ATM card and forced me to disclose the pin number to them.They arrested Mike and I and  on the way to SARS, Sergeant Abdulraman directed that the things taken from my  house be taken to ‘the workshop’. Onyinye and Mike were eventually detained till the following evening.When I went to her bank the following day I discovered that my  account had been emptied.

On Monday, 23rd February 2015, Victor’s younger brother, Azunna, got a call from SARS Ikeja to bring along the keys to his shop at Ojo-Alaba market where he sells generators. The following day he complied, only to be arrested and brought in handcuffs to the shop in Ojo-Alaba.The police team carried all the goods (generators) in the shop and then detained Azunna for four days.Up till date, Victor has not been charged to court and is still in the custody of SARS  Ikeja where he is being subjected to cruel torture.

I am therefore appealing to the IGP to investigate this case as the  rampaging SARS operatives have made the life of my  entire family very traumatic, and have subjected us to palpable fear, distress and apprehension.My husband’s life is. In grave danger and he may die in SARS cell”.

Reacting to the alleged torture and illegal detention,a non governmental organisation, Network For Police Reform (NOPRIN ) is calling on the police authority to prevail on SARS officers to be professional in the conduct of their duty.

Okechukwu Nwaguma the National Cordinator of NOPRIN said “The Nigeria Police authorities under the leadership of the current IGP, Solomon Arase, is called upon to put an end to arbitrary arrest and indefinite detention without charge.

Every arrested person has the right to be presumed innocent until proven guilty according to the law in a public trial at which he/she has had all the guarantees necessary for his or her defence. It is for the court to decide if a suspect is guilty. This can only be done after all the evidence has been heard and the person has been proven to be guilty beyond reasonable doubt.

Police must always ensure immediate release or charge and proper trial before a regular court respecting international standards of due process of all those held in detention;
The police must always allow all those held in custody for whatever reason full access to lawyers of their choice, their families and private doctors;The police must ensure that conditions of detention and imprisonment are in full compliance with international standards”. 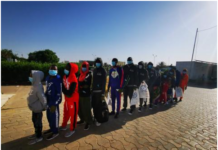