A lion barely escaped death in the hands of a giraffe as the king of the jungle was kicked and trampled during a fight.

This is one rare video of a giraffe getting aggressive and challenging a lion, even winning the king of the jungle hands down.
A video posted on Imgur.com has shown the shocking moment a giraffe brutal kicked and trampled a lion forcing it to land painfully on its back as it tried to attack the giraffe. 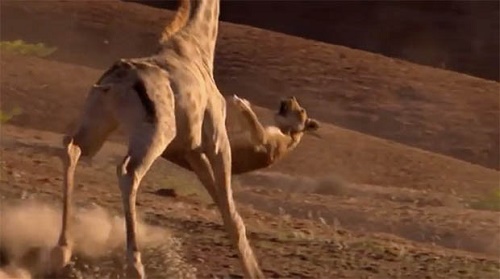 The giant giraffe totally unafraid, challenged the lion and as it tries to jump on its neck. It gave it a fatal kick as the lion lands painfully on the group with its back. Not done, the giraffe attacked more by trampling on it.
Many have been left shocked as they have not seen a video like that before. The lion was left injured in the process.
culled from :http://www.tori.ng/news/41736/shocking-moment-giraffe-kicks-lion-almost-tramplin.html