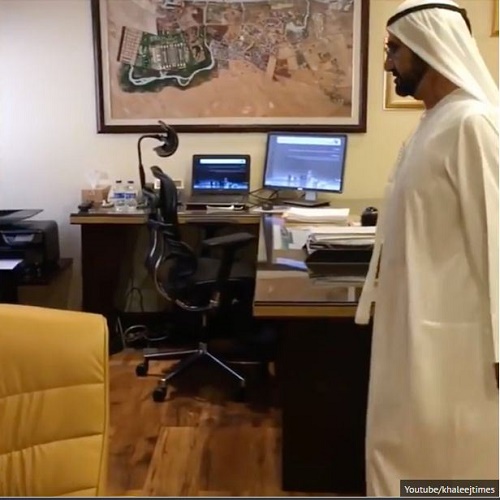 His Highness Shaikh Mohammad Bin Rashid Al Maktoum, Vice-President and Prime Minister of the UAE and Ruler of Dubai, on Sunday went on surprise visits to some local government departments, but what he found left him totally in shock.

Gulf News reports that morning visits to government offices are part of a long tradition by Shaikh Mohammad who is well known for his early-morning excursions to see firsthand how these departments are doing and ensure government services are up to Dubai’s globally-admired standards. But, he was left in shock after he made a surprise visit to the offices only to find no one at the offices. The ruler found out that the directors and senior officials were not present and didn’t come to work.

In a video tweeted by Dubai Media Office, Shaikh Mohammad was the only person seen in offices of a workplace which had his framed portrait hanging on the wall behind a glass-topped desk. In its tweet, Dubai Media Office said the inspections began at 7.30am.

“He certainly wanted to send a message,’’ Mona Al Merri, director-general of Dubai Media Office, was quoted by Bloomberg as saying.

“Timeliness starts at the top and we won’t go after employees when their bosses aren’t there.’’

As a result of the surprise inspection, nine high-powered officials have been ordered to retire by the strict leader.