The Rivers State Chapter of All Progressives Congress (APC), has raised
alarm over an attempt by Justice Chinwendu Nworgu and the Rivers State
Judiciary to frustrate the appeal of the judgment handed down by the
judge on October 10, 2018 in favour of Senator Magnus Abe supporters.

The APC in a statement signed by its Publicity Secretary Warisenibo
Chris Finebone noted that, “despite having entered an appeal and stay of
execution of the judgment, Justice Nworgu has frustrated every effort by
the APC to obtain a certified true copy of the judgment to enable its
legal team perfect the appeal process.”

The Statement reads: “Earlier in the week, sources close to the APC
revealed that shortly after the judgment was handed down, a tripartite
accord was struck by Gov. Nyesom Wike, Senator Abe and Justice Chinwendu Nworgu to ensure that Rivers APC is frustrated by ‘whatever possible means’ from swiftly perfecting its appeal process through the delay in making available to the party a certified true copy of the judgment.

“In a letter by Lateef O. Fagbemi, SAN, Counsel to the Respondents
(Ojukaye Amachree-led EXCO) addressed to the Director (Litigation) and
copied The Registrar, High Court of Rivers State, Fagbemi (SAN) stated:
“Considering
the nature of the case, being a pre-election matter of which time is of
utmost essence, efforts have been made by the Respondent, prior to this
application, to obtain a certified copy of the judgment so as to enable
her exercise her constitutional right of appeal against the said judgment in good time, but to no avail. It is now more than 7 days after the
delivery of the judgment in the open court, yet all effort to obtain
copy of the judgment has proved abortive.”

“We make bold to state that the inexplicable delay to make available the
judgment 9 days after Justice Nworgu read it in the open court runs
against the requirement that such judgment should be made available to
partieswithin 7 days. Unfortunately, there appears not to be any intention by Justice Nworgu and officials of the Rivers State Judiciary to comply
accordingly. We cannot but disclose our findings which unequivocally
revealed that Justice Nworgu is awaiting directive from Gov. Nyesom Wike
on whether to release the judgment to us or not. This is despicable and
should be condemned by all who cherish the integrity of the temple of
justice.

“As a party, we condemn this underhand scheme to pervert justice and
call on the Chief Justice of the Federation, the President, Court of
Appeal and the Nigerian Judicial Council to take notice and swiftly
intervene to forestall a resort to self-help in the face of an obvious
sabotage of the judicial system by Justice Nworgu, Governor Wike and
Senator Magnus Abe working hand in gloves.” 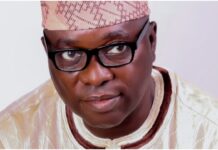