It only took a goal from Umar Sadiq in the 40th minute to ensure Nigeria’s Olympic football team at Rio 2016 qualified for the quarter-final stage of the competition in a Group B match at the Arena Amazonia on Monday morning..

Samson Siasia started with the same starting eleven that played the match against Japan but Umar Aminu had to start from the bench. 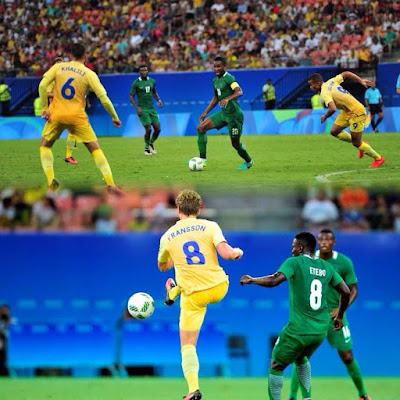 Nigeria passed the ball with a lot of confidence and swagger in the opening exchanges of the keenly contested battle and fans were surprised that they couldn’t score so early on in the game.
Umar Sadiq was denied by the goalkeeper after he broke free, Oghenekaro Etebo followed up from the rebound shot but the goal didn’t arrive after nine minutes. 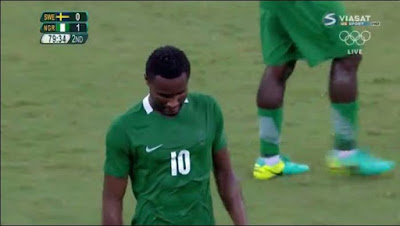 Despite Nigeria’s heavy presence on the ball and dictatorship of play, they didn’t pose much of a goal threat and were almost pegged back when Mikael Ishak fired at goal from a long ball which exposed the Nigeria defence but goalkeeper Emmanuel saved the ball. 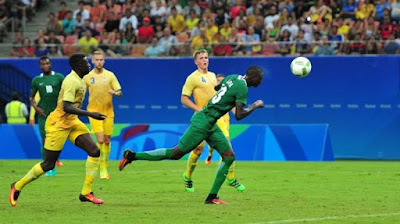 Highest goalscorer Etebo was denied time and time again by goalkeeper Andreas Linde but Umar Sadiq gave Nigerians the much needed joy when Umar headed the ball into the net from Stanley Amuzie’s left footed cross past goalkeeper goalkeeper Linde. 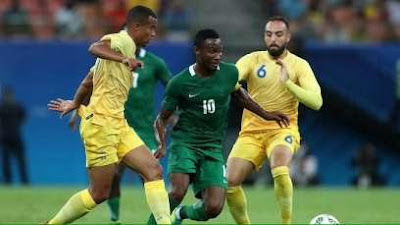 Mikel Obi, who had a wonderful performance as a number 10 had a rocketing shot saved by goalkeeper Linde.  Sweden tried to pile the pressure towards the end of the match and almost got an equalizer in the 90th minute, but Siasia’s men held on for the win which will send them to the quarterfinal of the competition.
Culled from: http://www.lindaikejisblog.com/2016/08/rio-olympics-umar-sadiq-scores-to.html
2016 Rio Olympics Etebo quarter-final stage Umar Sadiq