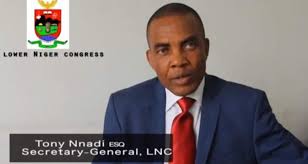 Following the seeming shockwaves of the 2019 polls, and the Tuesday recruitment of presiding officers of the National Assembly, a pro-restructuring group, Lower Niger Congress (LNC) has alleged that there is no future for the Igbo people of Eastern Nigeria in Nigeria.

For the LNC, it was high time the Igbo people awakened to what it described as ‘’the obdurate One-Nigeria’’. The Executive arm of the Nigerian government is being held by the North, (President Muhammadu Buhari), and Vice-President from the West (Prof. Yemi Osinbajo).

The Legislature has a Northerner as Senate President, Senator Ahmed Lawan and Speaker of the House of Representatives, Femi Gbajabiamila from the West.

The Judicial arm of the Nigerian government is under Ibrahim Tanko Mohammed, a Northerner  from Bauchi State as the Acting Chief Justice.

Going by the six geo-political power blocs in the country, three are favoured by the current arrangement. The North-West has the president, the North-East the Senate president, and the South-West, double offices of the vice president and Speaker of the House of Reps.

While the North-Central, South-East, and the South-South do not hold any number one position in the three arms of government, the Igbo people as one of the tripod of the Wazobia, is easily the worse marginalised by the power structure in Nigeria at the moment.

Coordinator of the LNC, Tony Nnadi, a lawyer, claimed in a statement wired to this reporter, ‘’there is absolutely no future for Eastern Nigeria in Nigeria’s political firmament and it’s better for the Igbo people to begin to shift discussions rapidly towards some kind of Let’s-Forget-Everything-Else-And-Go-Develop-The-East.’’

According to him, ‘’having watched some assemblages of economic/socio-political thought-leaders championing some initiatives and having observed the obvious ignorance of deliberately emplaced constitutional shackles to the development of Eastern Nigeria, exhibited by most of the key proponents and promoters of the regional economic initiatives, it became necessary to engage some the proponents with the stark provisions of the rogue constitution under which the initiatives would have to be pursued.

‘’These engagements are simply an extension of the wider debate the LNC which saddles itself with the task of breaking the aforementioned debilitating constitutional shackles (in a manner that either frees the East completely from the bondage called Nigeria or restores to the East in the minimum, the pre-1966 autonomy level to put the region back on the developmental trail already blazed by Premier M. I Okpara), has been having with those of our brethren from the East who constantly suggest that we should just ignore the shackles and limp along as fast as we can towards our destination in a race where are competitors have their legs and hands free of shackles and manacles.

‘’In one of the exchanges, I had cause to respond to a suggestion that the governors of the East should just Ignore Nigeria and pull together ahead to fix it’s electricity, railways, highways, ports and generally create an economic hub to reverse it’s fortunes in Nigeria.

‘’Here was my response: Wonderful as your suggestions are, please take out time to find out what and what you are permitted to do and what your governors and states are forbidden from doing under the regime of thec68-Item Federal Exclusive Legislative List in the 1999 Constitution of Nigeria. For starters, they are forbidden from generating or transmitting electricity (save in areas not covered by the National Grid)

‘’Still under that Exclusive List, which has Federal and State Elections on it, the simple matter of electing who will govern us in our various states and who will represent us in Abuja are sequestered from us and we have to wait from whatever one hopeless Caliphate-controlled INEC does from Abuja and that is why we have the lunatics that parade the Government Houses in Eastern Nigeria as governors and the kind of yam-heads that go to the National Assembly to represent us.’’

Continuing, the LNC leader alleged that those who govern Eastern Nigeria are processed 100% from outside Igboland, claiming that that is why the electorate always have the worst possible people foisted upon them.

‘’Even at that, your governors are not at all accountable to you as they are put beyond your reach for probe or sanction throughout their reign by virtue of the Immunity Clause while the spare keys to the state treasury are handed to them by the Appropriation Provisions (Ss 121&122)

‘’Still under the Exclusive List, the simple matter of registering or licensing businesses are titrated from Abuja and so they tightly control who is allowed into the economic field of play, whether to be licensed to own a bank or a telecommunications company, port operation, electricity distribution etc. Abuja can lift the Dangote it chooses to lift and put down the Ibeto or Innoson it chooses to put down’’, Nnadi said.

According to the pro-restructuring group spokesman, ‘’the Land Use Decree of 1978 is still ensconced in the impregnable fortress of the rogue 1999 Constitution along with the NYSC Decree of 1973 under which the children of Port Harcourt, Warri and Lagos are sent to go and perish in Gashua, Biu and Kaura Namoda, with no prospects of any meaningful employment while the children of Kano, Sokoto and Maiduguri are sent to Port Harcourt, Warri and Lagos where they serve in and are retained for employment in Central Bank, Ports Authority, Shell/Mobil and the like.

‘’Let us not talk about the ruinous quota system and it’s toxic twin-evil of Federal Character in which the worst of dumbheads from one part are chosen ahead of the most brilliant from another part. Let us not talk about the dubious Public Accounting System enabled by appropriation provisions that put the spare keys of the treasuries of Nigeria in the hands of 37 men (President and 36 Governors) and which by another provision, offers them a blanket immunity (S.308) having first absolved them of any responsibility towards the citizen {S.6(6)(c)}

‘’Though all these constitutional enshacklements and debilitations are countrywide, a little probe into the dates, circumstances and motives of their imposition will reveal how much targeted the East in all of it and so anyone who is hoping to go and fix his own little part of Nigeria and turn it into Eldorado is simply ignorant of what the reality is.

‘’The starting point therefore for any meaningful change in the affairs of the entrapped constituent components of Nigeria (including and especially Eastern Nigeria) is the collapsing of the worse-than-Apartheid 1999 Constitution and this is what the LNC targets to enact.

‘’The massive ignorance on these issues seems present in equal proportions amongst those chanting One-Nigeria and those chanting Biafra-Now-Now without any strategic designs of easing out the Nigerian occupation that is enabled by the rogue 1999 Constitution. If there be a need to go to a meeting fixed for a definite date and time at a venue in Trafalgar Square, London from Lagos, there may be those who may wish to trek to London from Lagos. They are liberty to do so.

‘’All will eventually get to London if they are not consumed by their folly and many will certainly not make the meeting. The LNC and its alliance partners are already rolling out a remediation scheme that will consume the 1999 Constitution along with the unitary Nigeria it foists. Those who wish to join the humongous tasks for that outcome are already taking their roles. Those who wish to argue with reality are of course at liberty to so do. Those who choose to run wearing the shackles and manacles placed on them by the enemy are at liberty to so do.’’