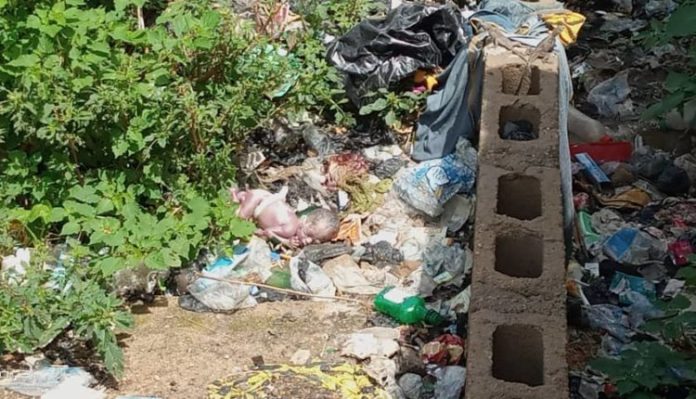 Residents of Gwalameji suburb of Bauchi, on Thursday, discovered the lifeless body of a newborn baby abandoned in a refuse dump.

The incident it was gathered, occurred at a refuse dump near the residential lodge at the heart of the area.

Residents of the area who besieged the scene to have a glimpse of the corpse of the day-old child said that the mother could have abandoned her overnight as the umbilical cord and placenta was still in the baby’s body.

A resident of the area, Abubakar Idris, who first saw the body of the baby said that he was picking waste plastic along with his brother when he discovered the lifeless body of the baby.

“We were picking waste plastics and was about picking a plastic when I saw a baby lying there. Immediately, I called my brother to come and see but he refused and ran away from the place. We saw a man walking and we called him and told him what we saw, he went to the place and saw the baby.

“I went and called our neighbour and my mother who came to see the lifeless baby. When I saw the baby, I became weak and my body began to shake and I felt like falling down and I had to sit down so I don’t fall,” he said.

Speaking on the issue, the Sarkin Gwallameji, Sanusi Sani, said he was called by his commander whose house is close to where the baby was found about the incident.

“Honestly, I was very sad beyond words over what I heard and what I also came and saw with my eyes here. A similar thing had happened some years back when we found a newborn baby in a well with water.

“This is not a good thing because so many people have been in need of children but here we are seeing a baby which God gave to someone but she threw her here allowing her to die showing her ingratitude to God for the gift. Honestly, my whole community and I are not happy about this,” he said.

Sani said that from their investigations, most babies that have been found in the Gwallameji area were brought from other places and dumped there and appealed to the people to report any suspicious acts by young ladies who have been found to be in the habit of doing such.

“I want to appeal to the people generally to know that this is a bad and wicked thing to do with what God gives us. If this child had come through a legitimate way, there is no way they will throw this child away, but from what we suspect, this child did not come from a legitimate way of marriage, because couples will want people to celebrate with them when they are blessed with children.

“They should know that this is a burden on everyone not just on the leaders, they should report any a pregnant woman they know is not married so that we will forestall this kind of recurrence,” he said

The Community Leader said that he immediately informed the Yelwa Divisional Police Headquarters about the incident and sent some of their men to the place, adding that the community had started investigating the matter to see if they will know where the baby was brought from and who threw away the baby.

“We have informed all our commanders around including Rafin Zurfi area to investigate to see if they will find out any lady that was pregnant and that pregnancy is no more there and she cannot explain the whereabouts of the baby.

The Police Public Relations Officer, Bauchi State Command, DSP Ahmed Wakili, confirmed the incident to our correspondent in a telephone interview saying that investigation had begun.

“Yes, it is true that an abandoned baby was found this morning at Gwallameji area and the community informed the Yelwa Divisional Police Station. Our men went there and took pictures and discovered that the baby had started decaying.

“We have launched an investigation into the matter and efforts are on to identify and arrest the culprit so that she can face the full wrath of the law,” he said.