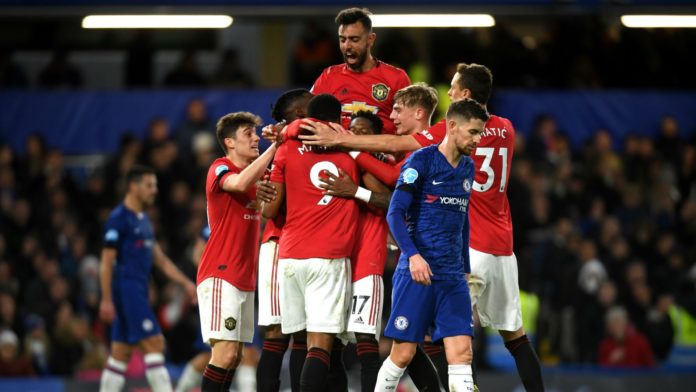 Goals from Anthony Martial and Harry Maguire got the crucial away points for Manchester United against Chelsea at Stanford bridge.
Chelsea began on a promising note with attacks on United with Willian and Bashuayi missing some great chances. On the 35th minute, Willian fell just by the 18-yard box after a run in what looked like a foul, but the referee gave him a yellow for simulation.
In the 44th minute,  United’s Wan Bisaka, the terror in the midfield, had the ball, ran into the right defense area where he beat the United defender and crossed the ball to a waiting Anthony Martial, who beat the United defender and goalkeeper with a back header to make it one-nil for the visiting team.
Second-half substitute, Kurt Zuama scored in the 55 minutes for Chelsea via a corner kick but a VAR check showed a Chelsea player pushed a United player in the box to invalidate what could have been an equalizer. 6 minute,
In the 65th minute, pressure on the Chelsea defense resulted in the second goal for United when Harry Maguire notched in a header from a corner kick.
Giroud who came in for Bashuayi in the 68th minute scored in the 76th minute through a sharp header via a right cross but it was ruled out for offside.
Odion Ighalo came in for Martial at the 90th minute and could have scored in extra time on his debut but was not lucky.
With the win, United remains 7th place while Chelsea occupies 4th place in the English Premier League.