Nigeria appears to be experiencing her worst ever economic epidemic at the moment. This epidemic is by and large afflicting the poor the most.,

When so many breadwinners are being afflicted with crushing poverty, it is no longer coming as a surprise that many children are being raised by more parents as collateral for their survival. However, this is not made broadly known.

In a densely populated area of Abuja, Nigeria’s capital, the father of a starving family offered his son of around 10 years to a rice trader as collateral for a bag of rice. Apparently moved by compassion, the rice trader refused to take the child home, but offered the buyer of paying up when he can.

In the Oyigbo area of Rivers State, a similar story is told of a mother who offered her six-year-old daughter in exchange for a half bag of rice. The mother allegedly took the child to the market, after settling for a price, she allegedly left the child behind, promising to rush home for the cash.

But, as at 6.00pm when the rice seller was to close, the woman was yet to return with the money. On the counsel of the market leaders, the rice seller took the child to the Oyigbo Police Station, where some officers were dispatched to smoke out the run-away woman. When they caught up with her, she allegedly told the police that she left her daughter behind as a collateral for the half bag of rice since she could not watch her family die of starvation due to their precarious financial situation.

That millions of children being raised by the poor is irrefutable. A new report by The World Poverty Clock shows Nigeria has overtaken India as the country with the most extreme poor people in the world. India has a population seven times larger than Nigeria’s. The struggle to lift more citizens out of extreme poverty is an indictment on successive Nigerian governments which have mismanaged the country’s vast oil riches through incompetence and corruption.

According to the report, 86.9 million Nigerians are now living in extreme poverty,  representing around 50% of the country’s estimated 180 million population. As Nigeria faces a major population boom, it is likely that the countrywill become the world’s third largest country by 2050, a problem likely to worsen.

However, having large swathes of people still living in extreme poverty is an Africa-wide problem, not peculiar to Nigeria.

That notwithstanding, the Nigeria Police, Cross River State Command, says they arrested a couple for allegedly trafficking their two-year old first son to an agent in Port Harcourt, the Rivers State capital, in exchange for money.

Commissioner of Police, Hafiz Inuwa, who presented the suspects to newsmen in Calabar, the state capital, said the cash-strapped parents were arrested last July 23 in Calabar after a report by the mother of the child, Mrs Magdalene Bassey.

Inuwa explained that the mother of the child reported that her husband, Mr Daniel Bassey, gave out the child to a trafficking agent for an undisclosed amount of money. ‘’On July 23 2018, one Mrs Magdalene Bassey reported at Efut Divisional Headquarters in Calabar that her husband, Mr. Daniel Bassey, took their first son to an unknown person in PortHarcourt through one woman called `Mumm’.

‘’The police immediately swung into action and arrested the suspect. During interrogation; the suspect revealed that his wife was a party to the transaction. The duo are now in police custody to unravel the cause of this inhuman action and possible prosecution’’, the police boss said.

The father of the child however, said that he gave out the child as collateral for N180,000 to help him pay his house rent. According to him, ‘’I did it based on the debt of N21,000 I collected from a friend to pay my house rent. There is no work in this rainy season and I am jobless. A guy from my area informed me that he knows a woman who lends money to people.

‘’That my friend told me that I can give out the child as collateral to get the money without necessarily selling him. The woman gave me N180,000 immediately after she received the child. After that, my mother in-law came and asked me of the child and I lied to her that I took the baby to my brother for holiday’’. 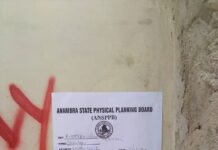