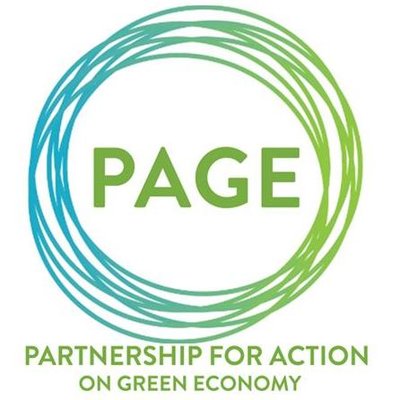 The Partnership for Action on Green Economy (PAGE) says it is proud to see that partner countries are thriving towards the creation of inclusive, green economies, delivering decent and green jobs.

Since 2014, PAGE has been working together with Senegal in this transition, offering support to meet current and emerging development challenges.

The group was however, launched in 2013 as a response to the call at Rio+20 to support those countries wishing to embark on greener and more inclusive growth trajectories. It seeks to put sustainability at the heart of economic policies and practices to advance the 2030 Agenda for Sustainable Development and supports nations and regions in reframing economic policies and practices around sustainability to foster economic growth, create income and jobs, reduce poverty and inequality, and strengthen the ecological foundations of their economies.

PAGE represents a mechanism to coordinate UN action on green economy and to assist countries in achieving and monitoring the emerging Sustainable Development Goals, especially SDG 8: “Promote sustained, inclusive and sustainable economic growth, full and productive employment and decent work for all.”

Last October 16, the government of Senegal received the Future Policy Award for its National Strategy for the Promotion of Green Jobs (2015–2020). The strategy, which was developed with PAGE support, serves as the country’s reference framework for green jobs promotion and represents a key instrument for implementing sustainable projects that have created 2,000 green jobs mainly for young people and women.

In a ceremony that took place during the 141st Assembly of the Inter-Parliamentary Union (IPU)  in Belgrade, Serbia, the World Future Council awarded seven other exemplary and impactful laws and policies aimed at empowering young people to build a fair and sustainable future.

Senegal’s National Strategy for the Promotion of Green Jobs (2015–2020) was built in a participatory manner. It strengthened the legislative, institutional and regulatory framework, creating green job opportunities, building human capacities, developing an appropriate financing policy, advocacy, and setting up mechanisms for monitoring and sustainability.

Of the green jobs projects that have been launched in the country, recycling, aquaculture and forestry projects all generated a return on investment in the second year of production. Furthermore, the policy is being taken as a model by other countries in Africa and beyond.

The 2019 winners included policies from Rwanda, Estonia, Scotland, Nepal, South Africa, Europe, Los Angeles (USA). They were selected from among 67 nominated policies from 36 countries and were also awarded in the ceremony in presence of more than 500 speakers of parliaments, parliamentarians and ambassadors from across the globe.

The World Future Council brings the interests of future generations to the centre of law and policy making. The Council consists of 50 eminent global change-makers from governments, parliaments, the arts, civil society, academia and business.

Together they form a voice for the rights of future generations. The Council addresses challenges to our common future and identifies and promotes effective legislative and policy solutions among decision makers.