Home Politics Outcome of Ghana’s Presidential Election was the will of the people –...
Share
Facebook
Twitter
Google+
Pinterest
WhatsApp
The outgoing President of the Republic of Ghana, Mr. John Dramani Mahama, Sunday, said that the outcome of the country’s Presidential Election, which held on the 7th of December and won by Mr. Nana Akuffo Dankwah, was the will of the people of Ghana.
Mahama who lost the election to Dankwah, however, promised not to do anything that will undermine the government of Dankwah.
Speaking at the well-attended Ovation Carol which held, Sunday, at the Convention Centre, Eko Hotels and Suites, Victoria Island, Lagos, Mahama said that he has ‘moved on beyond being president’ and re-emphasized that what happened was what the people of Ghana wanted, and it should not be toiled with.
While reiterating his desire to see Ghana continue to grow, the outgoing President said, “Next year, Ghana will be 60 years, and we expect to be where the people who started this journey in the last 250 years are’.
Speaking further, the President said, Ghana and Nigeria seem to be like birds of the same feather, “where whatever happens in Ghana or is happening in Ghana, also happens in Nigeria.”
“I wish our new President all the best and will not do anything to undermine his administration. Government is a continuum, I tried to restructure our economy and I believe a new government will continue from where we have stopped and recognize the sacrifice we made,” he said.
He described the Publisher of Ovation Magazine, Bashorun Dele Momodu as a agent of positive change , adding that both him and Chief Michael Adenuga, the Chairman of Globacom Group, who he said he gave the highest award in Ghana for bringing to Africa to Glo network, when the environment did not present the atmosphere to do that.
Mahama, who spoke to the admiration of the mammoth crowd stated that he would hand over power on January 7, 2017, adding that Nigeria and Ghana seem to have become some sort of ‘twins’ where what happens to one happens to the other. He was speaking of the defeat of former President Goodluck Jonathan, and his.
The outgoing President was later inducted into the Ovation Hall of Fame by Bashorun Dele Momodu in the presence of the Minister of Transport, Hon Rotimi Amaechi, former Governor of Ogun State, Otunba Segun Osoba, for his contribution to African unity and King Sunny Ade for his contribution to the growth of African music.
Also, the music producer, OJB Jezreel was remembered at the event for his contribution to the growth of Nigerian music. His family was invited on stage, while Dele Momodu urged well meaning Nigerians to endeavour to support the late music producer and singer’s family. American soul-influenced funk group that formed in the early 1970s Cammeo performed live on stage for the first time in Nigeria with the veteran artist King Sunny Adé ending the show in grand style.
Other performers were Korede Bello, Reekado Banks, Iyo, Abiodun Koya, Eniola, L. A.X, SHiiKANE, Zeynab Abib from Benin Republic,Niniola, Ruby & Pearl, Olu Jazz, Simi, Ranti, Dee Aja from Ghana, and sponsored by GLO. Previous editions of the event had featured top rated artistes such as Don Jazzy, Wiz Kid, Davido, Tiwa Savage, Waje, Yemi Alade, Eva Lordiah, Patoranking, D’Prince, Efya, Stonebwoy, 4×4, Praye, Wutah, Sammie Okposo, Abiodun Koya, Becca, Sarkodie, Okyeame Kwame, Mafikizolo, Irene Logan, Wiyaala among others.
The event was streamed live on different parts of Africa and Europe via satellite: HipTv, AIT, GHOne Tv, while the Europe audience was made provisions for on BEN TV. This year edition which was sponsored by telecom company Glo saw special dignitaries, celebrities and fans of good music in attendance.
A brainchild of Chief Dele Momodu, Chief Executive Officer of Ovation Group of Companies, The Ovation Carol 2016, was birthed in 2007 with the purpose of showing appreciation to God at the tail end of every year. 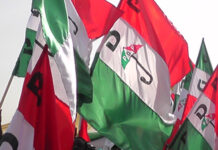