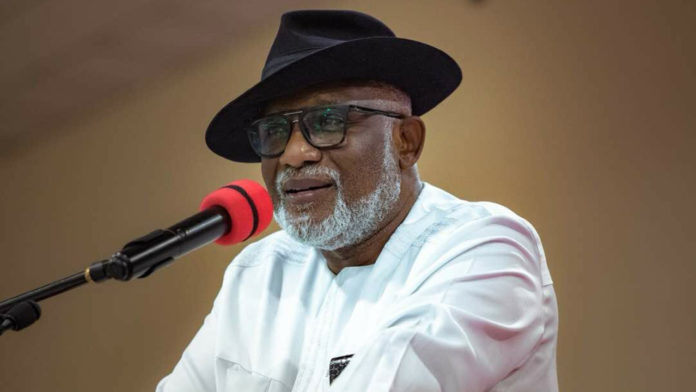 Peoples Democratic Party (PDP) National Campaign Council for Ondo Governorship election is currently hitting hard on Governor Rotimi Akeredolu who is seeking re-election on the platform of the All Progressives Congress (APC).

In a damning statement, Chairman Publicity Sub-Committee, Kola Ologbondiyan, says ‘’Governor Akeredolu in his self-serving administration cannot point to any developmental project that he has contributed to Ondo outside violence, entrenchment of corruption and enrichment of his cronies, relations and their cohorts with resources meant for the wellbeing of the people of Ondo.’’

The party has also cautioned the Independent National Electoral Commission (INEC) not to compromise the credibility of the coming October 10 governorship election in the state with the contemplation of using the unreliable Zpad technology in voter accreditation process.

PDP, according to Ologbondiyan, is ‘’demanding that Governor Akeredolu, his self-confessed militant and thug, Issac kekemeke and other APC agents of violence should be invited by INEC and security agencies and cautioned to desist from acts of violence like the one recently perpetrated by them in Oba-Akoko, where our candidate, Eyitayo Jegede, was almost assassinated, but for the intervention of the people.’’

Continuing, he said, ‘’our campaign recalls that the Zpad technology had failed during a test-run deployment for voter accreditation in Nasarawa bye-election; a situation that informed its rejection by INEC for voter accreditation in the September 19 Edo state governorship election, where it was only used to assist in direct uploading of results to INEC’s virtual portal.

‘’We therefore urge INEC to limit the Zpad technology to the purpose for which it has helped the commission to attain integrity as witnessed in the Edo governorship election.

‘’Our campaign also charges INEC to discountenance the blackmail by the All Progressives Congress (APC) against the replacement of the over 5000 card readers that were burnt by APC agents to frustrate the conduct of a credible governorship election in Ondo state.

‘’We also call on INEC to note that the APC is bent on its plots to frustrate the commission’s efforts following clear indications that there is no way its candidate, the failed Governor Rotimi Akeredolu, can win in a free, fair and credible election.’’

The PDP campaign says it is standing with the people of Ondo, demanding that INEC Chairman, Prof. Mahmood Yakubu, personally oversights the processes of recruitment of state polling officers.

‘’Our demand is predicated on information available to us that INEC officials detailed to handle the process are about being compromised by the APC to engage their members as INEC Adhoc staff with a view to using them to rig the election.

‘’For us in the PDP campaign, the irreducible minimum standard of the integrity for the Ondo election is to adapt the achievement attained by the commission in the September 19 Edo state governorship election.

‘’We want to inform INEC and all stakeholders that we will follow every process in the Ondo election to ensure that the Ondo people are not robbed of their legitimate votes at any level of the electoral process.

‘’It is instructive to note that after spending four years in a self-serving administration, Governor Akeredolu has nothing to offer the people of Ondo except a campaign of violence and divisive tendencies.

‘’The PDP campaign, therefore, appreciates the overwhelming support accorded to our candidate, Eyitayo Jegede, across the length and breadth of Ondo which signposts the end of the misrule of Governor Akeredolu and the APC in the state’’, PDP says.