Liberian president Ellen Johnson Sirleaf said late Tuesday no deal was yet on the table for Gambian leader Yahya Jammeh to leave power, saying an agreement would take longer than a day of talks.

“We come to help Gambians find their way through a transition. That’s not something that can happen in one day. It’s something that one has to work on,” said Sirleaf, who was acting as the head of a delegation of four West African heads of state. 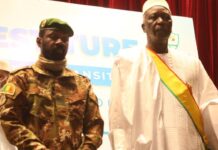