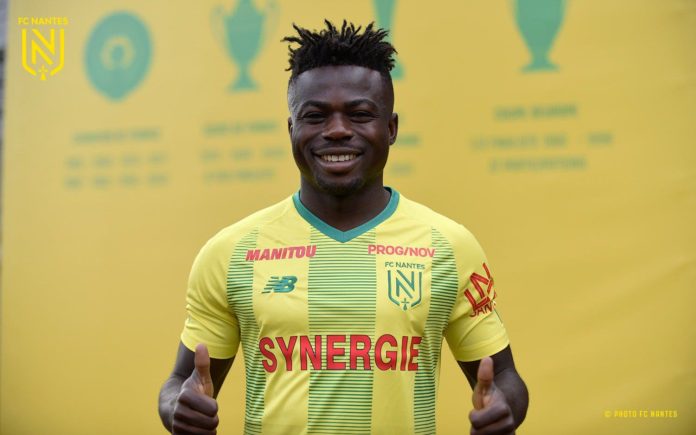 Nantes have completed the signing of Moses Simon on a four-year deal from Levante.

The Nigeria international will have the opportunity to continue his impressive performances in Christian Gourcuff’s team after he was named the Canary of the Season for the 2019-20 campaign.

Simon joined the Canaries on a temporary deal from Levante last summer after struggling to make an impact in La Liga last season.

Before the early conclusion of the French season, the Super Eagles winger contributed nine goals and eight assists in 30 appearances for Nantes and he also helped them finish 13th in the Ligue 1 standings.

The 24-year-old’s permanent contract is expected to start on July 1 and it will run through until 2024.

He claims he is enjoying his game in France presently after struggling to understand Spanish during his only campaign at Levante.

“At Levante, I did not play very well due to some circumstances with the coach. In Spain, the coach only spoke Spanish and I needed a translator,” Simon said.

“It was easier to play in France because I understand the language more and communication is very good with the coach.

After developing his game at Golden Boot Soccer Academy in Jos, the 24-year-old started his European journey at Ajax but he failed to secure a contract with the Dutch outfit and he moved to Slovakia to join Trencin in January 2014.

Following a year with the Slovak club, Simon moved to Belgium to team up with Gent where he spent three years before signing for Levante.

During his three-year stint at Gent, the Jos-born attacker won the Belgian First Division A and the Belgian Super Cup in 2015.

Internationally, he is a regular fixture in Gernot Rohr’s Nigeria squad and he was part of the team that won bronze at the 2019 Africa Cup of Nations in Egypt.

Since he made his international debut for Nigeria in March 2015, Simon has scored five goals in 33 appearances for the Super Eagles.