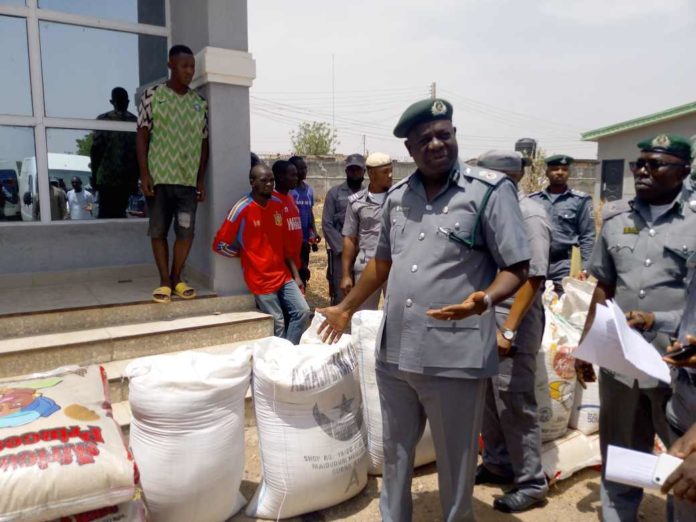 The Nigeria Customs Service, Federal Operations Unit, Zone D, Bauchi, has disclosed that it has seized contraband worth N197,416,380.

The Comptroller, of the Federal Operations Unit (FOU), Adesanmi Omiye, who disclosed this while briefing Journalists on Thursday, at the Zonal headquarters in Bauchi, said that the success was recorded from November 2019 to March, 24th, 2020.

According to him, 5 sacks of pangolin shells weighing 150kgs, 799 bags of foreign rice, 218 jerricans of 25kgs of vegetable oil, 628 cartons of foreign soap, 12 vehicles, 8 motorcycles, 117 jerricans of PMS, 20 bales of used clothes and 40 wraps of marijuana, were seized within the period.

“On the 25th February 2020, the Operatives of Federal Operations Unit, Zone ‘D’ Bauchi, based on intelligence, raided some warehouses/shops in Gombe and successfully evacuated 327 bags of 50kgs of foreign parboiled rice classified under the heading 1006 of CET and 386 cartons of 80 pieces per carton of foreign soap classified under the heading 3401 of the CET with total DPV of N3,237,300 only”

“On the 15th February 2020, the Operatives of the unit together with Strike Force Team and Adamawa/Taraba Command Offices at Gella road checkpoint in Mubi, Adamawa state, made a seizure of one used bus with number plate XA 421 KBY, conveying five sacks of Pangolin shells weighing 150kgs classified under the heading 0507 with Duty Paid Value of N166,455,000 only”

“On the 7th of March, 2020, the Operatives of the Federal Operations Unit (FOU), zone ‘D’ Bauchi while on credible information patrol around Song/Farang axis in Adamawa state, intercepted two used vehicles, one Toyota Starley with registration number MHA 765 AA and one Toyota Corolla with registration number MHA 786 AA loaded with jerricans suspected to be PMS (Premium Motor Spirit).

“Upon physical examination, the two vehicles were discovered to contain 62 jerricans of PMS classified under heading 2710 of CET with total DPV of N2,961,000.”

The Custom Boss further said that the FOU Operatives who were on patrol on Wednesday 18th December 2019 along Gembu-Bali road in Taraba State, made a seizure of one used mini-truck with registration number YLA 449 AL conveying 92 bags of 50kgs of foreign parboiled rice classified under the heading 1006 with DPV of N3,012,000 only.

“The total Duty Paid Value for the 18 seizures is N197,416,380 only,” he said, adding that “these unprecedented seizures and revenue were achieved as a result of sharing of information, intelligence gathering and doggedness of the officers/men of the FOU, Zone ‘D’ in making the zone unbearable for smugglers”

He warned smugglers and would-be smugglers to desist from their nefarious activities even as he reiterated the firm commitment of the service to ensuring that all caught face the full wrath of the law.

“I want the smugglers to know that we will continue to unleash our strategies in order to have a smuggling free society. I am pleading with well-meaning Nigerians to assist us in providing genuine information that would aid in eradicating smuggling in this country. Eradicating smuggling will boost the economy which will make the federal government provide social amenities to the citizenry,” he added