Mum cries out for help as daughter’s body gradually shuts down.

A heartbroken mum has made a public plea as her teenage daughter’s body starts to shut down due to severe eating disorders.

Adele Clay is seriously ill with hypothermia in hospital after tests revealed her heart rate had dropped dangerously low.The 25-year-old from Stockport, Greater Manchester, has anorexia and bulimia.

Her parents Yvonne and Rick are terrified she will die before she gets the help she needs.

Yvonne claims Adele, who has battled her eating disorders since she was 12-years-old, has been rejected by a number of hospitals for treatment, at first because she wasn’t ill enough, and now because she is too unwell. 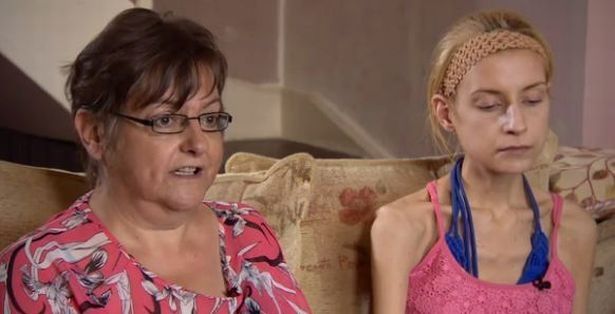 “There were times when she would abscond, but then we sent her to a secure clinic in London.
“She was there for 12 months, and actually came back quite well. But over the last three years she has relapsed time and time again and has become really ill“We keep asking for help but no one is giving it.“Her organs started to fail yesterday.“We are begging for help now. We know it’s her last hope, her last resort, she can feel her body shutting down and it’s terrifying.

“We don’t want to lose her and we are keeping the faith but it’s like living on eggshells.“Every time we hear something drop upstairs Rick is straight up there checking in case she’s collapsed.“We are waiting and watching her all the time and it’s killing us.