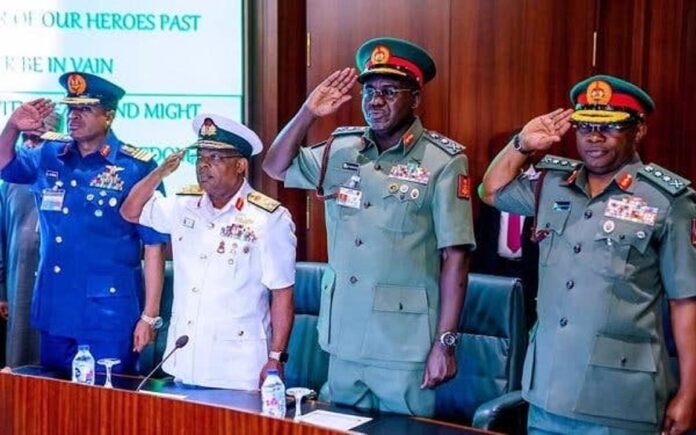 The Military Writers Society of Nigeria (MWSN) has warned media houses against unwittingly aiding fifth columnists to fuel disaffection among the leadership of the country’s armed forces.

In a statement on Thursday, the Society’s President, Akanimo Sampson, says there is no lack of cooperation and synergy among the military chiefs in Nigeria.

‘’What is often perceived as lack of cooperation and synergy among the military top brass, is a seeming lack of proper understanding of the operational and strategic systems at work on the plural frontlines’’, the Society says.

‘’Disturbingly, some of our inability to clearly understand military operations, has compelled some of us in the media to erroneously attribute certain developments as igniting the spate of violent attacks by terrorists and bandits in Nigeria’’, the military writers society adds.

‘’One of the principal requirements for success at both the operational, and strategic levels of command is broad thinking and having a broad vision. Such ability is what the Germans call operatives Denken (operational thinking).

‘’From our vantage position as a pro-military organisation, we know that operational thinking is not identical to what information warfare advocates call situational awareness.6 The extensive use of this term in the US and other militaries is one of the best proofs of tactical vs. operational thinking therein.

‘’An operational theatre commander thinks operationally in exercising his responsibilities and authority across the entire spectrum of the conflict in Northern Nigeria. Operational thinking is the most critical in a high-intensity war.

‘’Interestingly, all types of operations short of war, such as combating terrorism, piracy, counter-insurgency, and peace operations, require that operational commanders think operationally rather than tactically.

‘’Importantly too, success of any military formation depends on the experience and good judgment of its leaders. Ideally, all commanders have a high level of professional education and training in addition to some critically important character traits.

‘’The higher the level of command, the more important it is that commanders and troops meet these requirements. Wars are not won or lost at the tactical level but at the operational and strategic levels. This is why operational commanders are selected based on their proven or potential war-fighting abilities and not their political connections or management skills.

‘’Operational commanders are not managers. They are first and foremost war-fighters’’, the Society explains.

Continuing, the group said of recent, the violent activities of terrorists and bandits in the North are decreasing because of the intense heat on them.

‘’We are also concern that the outburst of Governor Babagana Zulum of Borno State, accusing the military for the attack on his convoy, in Baga, one of the hot spots of terrorists attacks in Borno, was reported out of context.

‘’Since his emergence as a governor, there is no evidence to show that Zulum has consciously rallied Borno elders and leaders to end the worrisome insurgency in the region. Attacking troops who are laying down their lives to ensure the safety of the country at every turn is simply an irresponsible politics.

‘’We are also not aware of the imaginary rivalry between the Chief of Army Staff Lt. Gen Turkur Buratai and the Chief of Air Saff, Air Marshal Sadiq Abubakar, as being mouthed about in some quarters.

‘’As an organisation of military writers, we are committed to the development of the profession of the Armed Forces through the exchange of ideas in the written medium. We are out to kindle love of the men and women who defend Nigeria, and a deeply personal understanding of their sacrifice and dedication.

To achieve our goals, we are employing the instrumentality Advocacy, Collaboration, and Promotion. The Society is set up to achieve certain objectives that are either short term or long term. The Objectives are as follows: Helping veterans, retired military officers to write and publish their memoirs and biography or autobiography for posterity, organise book reading, exhibition, and paintings.

Organise workshops and seminars on stress management, meditation techniques, writing skills and public speaking for veterans and serving officers as well as using writing to provide balanced information on security matters viz-a-viz the involvement of the military in Nigeria.

Chairman of its Governing Council, Dr Abubakar Sani, had earlier said that the Society was seriously concerned about how to actively involve veterans and retired military officers in literary works.

Dr Abubakar Sani, spoke in Abuja on Tuesday after their virtual meeting of the Council in which some key members of its Executive Committee were given the nod to pilot the affairs of MWSN.