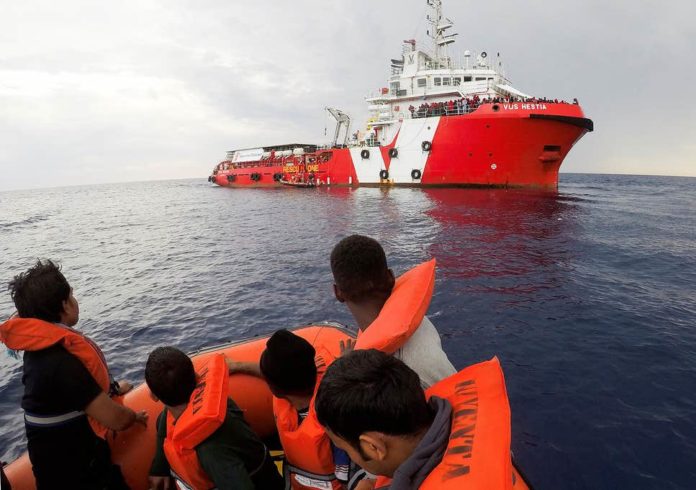 A boy from Ghana is reported missing in the Central Mediterranean where some 88 survivors were rescued by an NGO Sea-Eye’s ship Alan Kurdi on October 26. The survivors disembarked in Taranto, Italy on November 3, after a week at sea.

Survivors reported to the International Organisation for Migration (IOM) staff present at disembarkation that when the ship was threatened by an unknown Libyan vessel, which fired warning shots while the rescue operation took place, several people on board got scared and jumped into the water.

Also, in the Central Mediterranean, the remains of two people, believed to be from North Africa, were recovered on October 31 from a boat found adrift off the coast of Tertenia, Sardinia, Italy. The remains were transferred to the morgue of Lanusei hospital.

IOM Italy however reports that 89,997 migrants and refugees have successfully entered Europe by sea through November 6, roughly an 11 per cent decrease from the 101,185 arriving during the same period last year.

Arrivals this year to Greece and Spain are at 48,804 and 22,339, respectively, (71,143 combined) accounting for about 79 per cent of the regional total, with the balance arriving in much smaller numbers to Italy, Malta and Cyprus. Arrivals to Greece are running approximately 75 per cent ahead of 2018’s totals from this time. Arrivals to Spain are more than 50 per cent lower.

Deaths recorded on the three main Mediterranean Sea routes through 5 November stand at 1,090 individuals – or about 52 per cent of the 2,098 deaths confirmed during the same period in 2018.

These 1,090 deaths at sea include several documented only in recent days.

IOM Rome’s Flavio Di Giacomo cited official Ministry of Interior figures of 9,944 migrants have arrived in Italy by sea this year through October 30, compared to 22,232 at this same time in 2018. IOM Libya has reported that through October 31 almost 8,300 migrants have been intercepted at sea and returned to Libya in 2019.

IOM Greece’s Christine Nikolaidou also reported on Thursday that from Friday up to date, the Hellenic Coast Guard (HCG) participated in at least 13 incidents requiring search and rescue operations off the islands of Chios, Lesvos, Samos, Kos, Kalymnos, Farmakonisi, Symi, Samothrace, Megisti and the port of Alexandroupoli. The HCG rescued a total of 346 migrants and transferred them to the respective ports.

Those arrivals, plus others between October 30 and November 5, bring to 48,804 the total number of sea arrivals to Greece this year

In addition to the Mediterranean, sea crossings from the north-western coast of Africa to the Canary Islands, the Western Africa route’ to Europe was the scene of at least one shipwreck in the early hours of Wednesday, November 6.

A boat overturned in a rocky area near the municipality of Teguise, in the island of Lanzarote. Four of its occupants were able to reach the beach, where they received emergency medical assistance from a Red Cross team.

Those survivors reported that there were 15 people on board. Salvamento Marítimo, Spain’s public rescue service launched a-rescue operation, during which the remains of four people were found that same Wednesday, while five more bodies were retrieved on Thursday. Two people are believed to be missing.

This tragic incident took place just a few days after another shipwreck was documented on this route. On October 29, an oil tanker rescued 29 people from a cayuco sailing 607km south of Gran Canaria, as well as the remains of four people.

According to testimony from survivors of that craft, a fifth person went missing at sea.

Migrating by irregular means not only to, but also within, the European continent remains dangerous for people on the move. Recently (October 31) Slovenian authorities discovered remains of two men in the Kolpa/Kupa river, near the municipality of Vukovci, Slovenia. Authorities believed they drowned while trying to enter Slovenia from Croatia.

A few days later, a young man was killed in a car crash in the Egnatia Odos highway in northern Greece, near Thessaloniki.

In 2019, IOM has documented 100 deaths during migration on the European continent, a slight increase over the 98 deaths documented in the same period of 2018.

Migrant Deaths in the Americas continue during what may be the deadliest year MMP has recorded in the past six years. In total, at least 629 people have lost their lives in the Americas in 2019, compared with 515 recorded through this point in 2018.

On the US-Mexico border, two migrants recently drowned while attempting to cross the Río Bravo into Texas from Tamaulipas: on October 31, Mexican civil protection authorities found the remains of a man near Matamoros, while a few days later, on November 4, the body of another man was found near Ciudad Miguel Alemán.

In 2019, at least 107 people have drowned in the Río Bravo, including 90 men, nine women and eight children.

In the Caribbean, three people drowned while trying to cross the Massacre river from Haiti to the Dominican Republic. The remains of two Haitian men were recovered near the municipality of La Vigía, Dajabón on October 31, while a four-year-old girl who was travelling with them is still missing. While the Missing Migrants Project data are compiled by IOM staff based at its Global Migration Data Analysis Centre but come from a variety of sources, some of which are unofficial, the report Fatal Journey Volume 4, published June 28, includes an overview of five years of Missing Migrants Project data (2014-2018) and an update on what is known about deaths during migration in 2019.