anchester United take a huge step to the Europa League final but, possibly even more significantly, that was because the electrifying Marcus Rashford made yet another assured stride in his soaring career. The brilliant young forward also showed just another quality to his game, as he settled this 1-0 first-leg win at Celta Vigo’s Balaidos stadium – and supplied a crucial away goal – with the first set-piece strike of his career.

Rashford’s exquisite 67th-minute free-kick was also a fitting way to settle a free-for-all of a game, but one that United should still have probably won by much more, after a genuinely commanding performance. The team, and Rashford, were hugely impressive. Both seemed let off the leash, and almost every one of Jose Mourinho’s paid off, even if – once again – not every chance did.

Sergio Romero was again solid in goal at the expense of the benched David De Gea, particularly pulling off one brilliant save from Pione Sisto, and United were generally in control when going toe to toe with an open Celta.

This was anything but a cagey European first leg. Celta of course went at United with the thrusting directness you would expect from a manager in Eduardo Berizzo who has previously been assistant to the high priest of high pressing, Marcelo Bielsa but – bar a few early openings and one bad Daniel Wass miss from a 10th-minute header – that effervescence seemed to only have the effect of giving United extra space for their creators, and especially Paul Pogba and Rashford, to play.

It was a moment from Rashford that typically began to tip the tie in United’s favour, as his 20th-minute curled effort forced one of a few brilliant saves from Sergio Alvarez. The Celta goalkeeper followed that with what was probably the stop of the game – and one the David De Gea would have been proud of – by somehow blocking Lingard when the midfielder was clean through just before half-time. In between, Paul Pogba had played a fine through ball for Henrikh Mkhitaryan, but Alvarez’s touch to put this one wide was probably more down to sloppy finishing from the Armenian rather than a particularly improbable save.

It was yet another example of a United player squandering a chance that the French star had so excellently set up, as has been something of a problem throughout this season, but Pogba was still greatly enjoying the greater space and revelling it.

It wasn’t just about the finesse of his passes, but also his physicality, such as when he so brilliantly and almost effortlessly held off Pablo Hernandez on the edge of the Celta box to initiate yet another attack.

Romero did have to offer a save to match one of Alvarez’s, and that De Gea would also have been proud of, justifying Mourinho’s decision to start him. Pione Sisto tried to catch him out on 58 minutes with a divine curled effort from a similar position to Rashford’s in the first half, but Romero got up to touch it over. 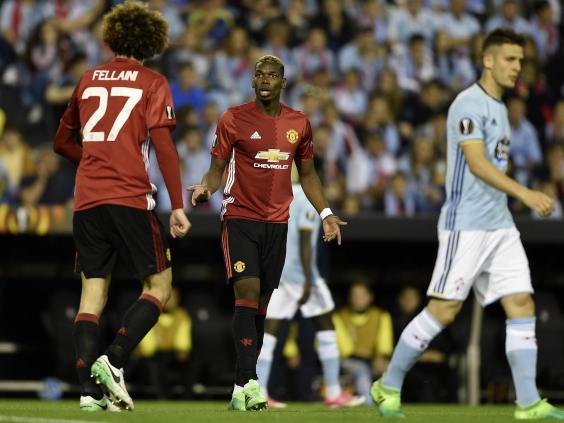 Pogba put in an impressive performance in midfield (Getty)

Celta had so clearly upped it again, but were given a warning not to up it too much when Marcus Rashford span their defence supremely on 62 minutes for an electric break… only to see his shot drift breezily wide.

His next contribution was the complete opposite of that kind of waywardness. Celta captain Mallo had pulled Rashford to the ground on 66 minutes, only for the young United striker himself to step up for the free-kick. He exquisitely curled it away from Alvarez’s grasp and right into the corner, giving United an away goal, and showing just another ability that he has.

It was a moment when Alvarez might have been a touch more lively, but the goal also seemed to suck some of the life out of Celta, as they lost some of their thrust. Some of their players also lost their temper with Rashford when the forward pulled up with a knock and seemed to go off the pitch conspicuously slowly. 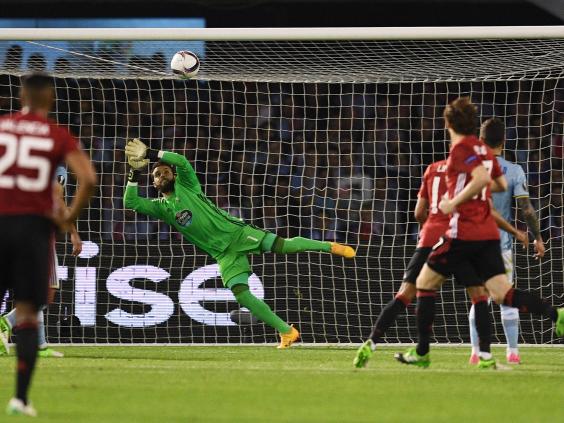 He may be a doubt for Sunday against Arsenal now, although Mourinho has already made it clear he will rest players if required, but there can be no doubt about his quality.

His career continues to pick up speed, and it is now going to take an awful lot at Old Trafford on Thursday for Celta to stop him and United going to Stockholm.

Anambra 2021: Let Rotation and Zoning Be

January 24, 2020
Newschronicles is your news, entertainment, music fashion website. We provide you with the latest breaking news and videos straight from the entertainment industry.
Contact us: info@thenews-chronicle.com