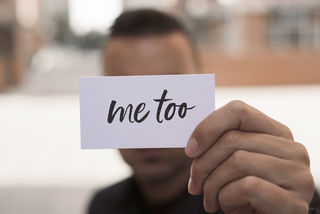 Male victims of sexual assault are largely neglected in our society. Majority of sexual assault are perpetrated by the men, but the real fact is that 1 out of every 10 men is a victim of sexual assault either by a man or by a woman. Males are being abused in our society and it’s not being addressed because our society fails to see that men can be victims of abuse, men find it difficult to seek help and support even at a very tender age.
Whenever rape is mentioned, what usually comes to the mind of people is a man taking advantage of a woman. Why does no one care to talk about male rape? About sexual victimization? Why are men expected to just remain calm and pretend as if they enjoy being abused?

Children are being abused every second; right under our nose, just like the case of a 12-year-old boy in Abuja who was sodomized by a certain chief pharmacist of the National hospital Abuja, but was lucky for his mother to have noticed that something had gone wrong, who probed and got details of how the pharmacist carried out his evil deed. Kudos to operatives of National Agency for the prohibition of Trafficking in person’s (NAPTIP).
Another of this incidence is the case of a 4 years old boy who was being abused by a 24 years old maid identified as Esther Emmanuel. She was arrested by the police in Rivers State. Esther’s secret act was disclosed to the doctor when the boy was taken to the hospital due to the pain the boy had started having in his private organ.

A story was published by the Guardian newspaper on the 17th day of July, 2011 about sexual assault on males. These were what transpired in the office of a counsellor in Kampala, Uganda. A client who visited the office of Eunice Owiny who was employed by Makerere university’s Refugee Law Project (RLP) to help displaced people from all over Africa to work through their trauma. A female client complained of her husband’s inability to have sex, that her husband feels bad about it, she said; she is sure he is hiding something from her. When the husband was invited in they couldn’t get him to speak, then the wife was was asked to leave, that was when the man began to talk about what had happened to him. He reached into his pocket and brought out an old pad. He said he had to use pads as a result of what had happened to him. He narrated how he was captured and separated from his wife by rebels during the war.

The rebels raped him three times a day every day for three years. And he wasn’t the only one, he had to watch how they were being raped in turn. The wound of one of his fellow captive was so severe that he died in the cell in front of him. His rapist left him with the only hope of wearing a pad and an injured anus producing pus that he can’t show or tell his wife or anyone about. So he has to bear the pain and trauma alone. Because he’s a man he has to bear the pain and torture, because he’s a man the society does not pay attention to him.

A lot is happening in our world, males are being sexually assaulted every second, people are beginning to talk about it but a lot still needs to be done. These boys and men live through the years with memories that leave them disturbed and that’s if the rapist even let them live. There is no excuse for sexual abuse, anyone can be a victim, let’s be vigilant and sensitive to happenings around us, no one can be trusted.

We call on the authorities and Nigerian Government to help curb these menace. This is a wake-up call to parents to protect their boy child too because the perpetrators are everywhere, we are not to leave them with female or male caregiver without proper attention and monitoring.