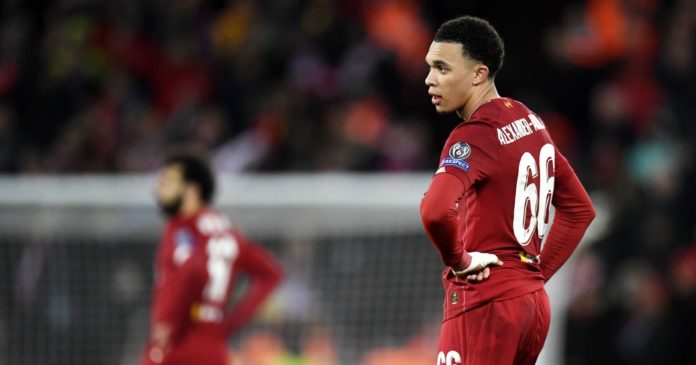 Holders Liverpool crashed out of the Champions League in the last 16 after Atletico Madrid scored three goals in extra time to earn a shock 3-2 victory at Anfield on Wednesday that sent them through 4-2 on aggregate.

After falling 2-0 down on the night, substitute Marcos Llorente struck twice in extra time and Alvaro Morata added a late third to ensure a famous victory for Diego Simeone’s side against a Liverpool team unbeaten in their last 25 home games in European competition.

Yet after last season’s memorable comeback by Liverpool against Barcelona in the semi-finals, it was the Spaniards who turned the tables this time.

Simeone’s Atletico are famed for their defensive solidity and their superb organization and those qualities were on full display, but it was their clinical finishing and remarkable spirit that proved the key elements.

“We don’t know where our limit is,” said Llorente who had only scored once for Atletico before this game.

“We all defended until the death and when a team all digs in like this, things like this happen. I cannot describe this feeling,” he said.

Liverpool manager Juergen Klopp was not impressed with Atletico’s approach, however.

“I don’t understand the quality they have the football they play. They could play proper football but they stand deep and have counter-attacks,” said the German.

“We accept it of course but it doesn’t feel right tonight,” he said.

After allowing an early chance for Diego Costa, which the former Chelsea forward drove into the side-netting, Liverpool, trailing 1-0 from the first leg, laid siege to the Atletico goal.

They powered forward in waves of attacks but Atletico was resilient with central defenders Stefan Savic and Felipe foiling everything Klopp’s side threw at them.

The home team broke through two minutes before halftime when Alex Oxlade-Chamberlain burst to the byline and pulled back a cross to Wijnaldum who powered an angled header into the bottom corner.

There was little change to the pattern of the game after the interval with Liverpool peppering Oblak’s goal but the Slovenian proved himself up to the task, denying efforts from Mohamed Salah, Firmino, and Sadio Mane while Andy Robertson headed against the bar.

Atletico thought they had grabbed a stoppage-time winner when Saul Niguez headed in a Renan Lodi cross but the effort was rightly flagged for offside, ensuring the game went to extra time.

It took just four minutes for Liverpool to take the lead in the tie with Firmino heading against the post and driving home the loose ball as Anfield got ready for a night of celebration.

Yet then it all went wrong for Klopp’s side.

Goalkeeper Adrian, standing in for the injured Alisson Becker, passed the ball out straight to Joao Felix who fed Llorente and the substitute punished the Spanish keeper with a precise shot into the far corner.

Llorente produced a carbon-copy finish following good work on the counter from Morata to end Liverpool’s hopes of defending their European crown.

Morata put the icing on the cake in the final moments with a cool finish after Liverpool had thrown all their players forward.

The pain of this exit will surely ease for Liverpool, who are 25 points clear in the Premier League and will soon win their first domestic league title for 30 years.

But for Atletico, who have never won Europe’s premier club competition, this was a triumph which will have them dreaming of even greater things.

“This will go down in our history,” said Simeone.

“It fills us with pride as a club, to be once more one of the top eight clubs in Europe.”