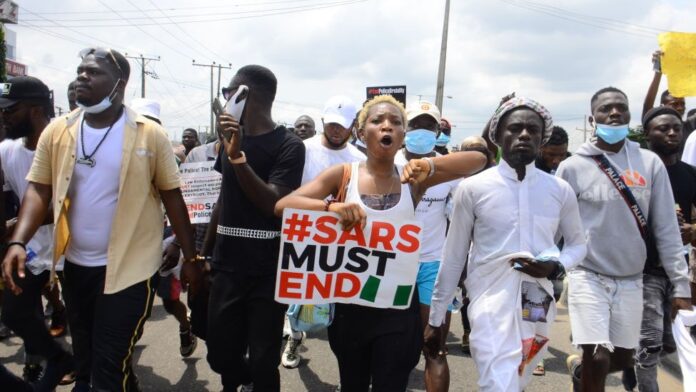 Nigeria under President Muhammadu Buhari’s watch appears to be cycling back to the June 12 era under the Sani Abacha military dictatorship. This might not be quite surprising.

Buhari has been a very strong supporter and defender of Abacha. On June 8, 2008, Buhari loudly declared that the late dictator did not loot the national treasury contrary to the general impression of the country.

Buhari who earlier ruled Nigeria between 1983 and 1985, gave Abacha the clean bill in Kano after the remembrance prayers marking 10 years of the death of Abacha, who ruled between 1993 and 1998 then.

At the moment, the United Kingdom parliament is debating sanctions to hand out on the Buhari administration officials  allegedly involved in the killing of peaceful protesters in Lekki on October 20 and other parts of the country.

UK lawmakers are looking to impose direct sanctions on the administration officials, who played a role in violating human rights during the protest instead of a general economic sanction that may affect ordinary citizens.

The UK parliament decision is in a response to a petition signed by over 220,118 individuals in the United Kingdom, requesting the UK government to sanction Nigeria for alleged violations of human rights.

The reply from the parliament partly reads, “The UK Government is deeply concerned by violence during recent protests in Nigeria, which tragically claimed lives. Our thoughts are with the families of all those affected.

“Parliament will debate this petition on November 23, 2020. You will be able to watch online on the UK Parliament YouTube channel. On July 6, the British Government established the Global Human Rights sanctions regime by laying regulations in Parliament under the Sanctions and Anti-Money Laundering Act 2018.

“The Foreign Secretary set out in full the scope of the UK’s new Global Human Rights sanctions regime. He announced the first tranche of designations, as well as the Government’s approach to future designations.

“We will continue to consider potential designations under the Global Human Rights sanctions regime. It is a longstanding practice not to speculate on future sanctions designations as to do so could reduce the impact of the designations. The UK Government will keep all evidence and potential listings under close review.”

In Nigeria however, effective economic sanction will mean that the Buhari administration does not have viable alternative that will enable it to survive sanction on Nigeria’s export of crude petroleum.

The US and her allies can decide to embargo Nigeria’s export of crude petroleum until the Buhari administration agrees to the principles of economic and political liberalism as desired by the citizenry through the EndSARS protest.

During the June 12 crisis, lobbyists for the Anglo-Dutch oil and gas major, Shell, and all the other big oil tried to persuade Washington that economic sanctions against Nigeria will hurt the Nigerian masses more than it will the Abacha regime.

With its professed support for multilateralism and the principles of economic and political liberalism in the world, the Clinton administration did not ignore the grave impact that “doing nothing” will harm the pro-democracy movement and human rights activists in Nigeria.

In that situation, the oil companies were relevant instruments of economic statecraft because the drilling of crude petroleum and its transportation to the west was largely carried out by the oil majors, as remains the case, and therefore, sanctions that affect the oil sector will affect the profits of the oil companies.

Oil companies, the Commonwealth of Nations are relevant if effective economic sanction is to be imposed against President Muhammadu Buhari’s administration as a result of killing peaceful protesters.

As Klaus Knorr argues, the logic of economic sanctions “prescribes that the enemy suffer a maximum reduction of his economic base relative to one’s own costs must be taken into account.’’

Given that the effectiveness of e.conomic sanctions tend to depend on the availability of alternatives for the target states and the costs to the sponsoring state, cooperation by ideologically similar states and their level of commitment to use economic sanctions to influence the behaviour of the target state is a necessary, but not sufficient condition for an effective outcome, especially against a peripheral .and undeveloped state like Nigeria.

However, there is need for caution on effective economic sanction on the Buhari administration which presides over an intense case of politicised ethnicity and religion.

According to Margaret Doxey, economic sanctions are measures taken unilaterally or multilaterally in response to an unwelcome or unacceptable act by another government……In a paper economic sanction as an instrument of foreign policy is defined as one state’s action(s) aimed positively or negatively at influencing the behaviour and therefore the policies of another state.

The economic effect of sanctions on the late Abacha military dictatorship (1993·1998) in Nigeria is therefore analysed in the context of its impact on that leadership’s willingness to change its behaviour in the expected direction.

Perhaps, economic sanction was a preferred option of influence. This means, for instance, direct intervention for achieving the desired outcome of a more open system of judicial resolution of political differences in Nigeria.

Arguably, US’ structural power in the international system at the end of the Cold War was aimed at promoting free market principles and democratic transitions. Although economic sanction as a tool of foreign policy is a historical fact, some analysts argue that economic sanctions have not been effective in changing the behaviour of target states.

The United Nations and powerful states like the US use economic sanctions in bilateral and multilateral strategies in their efforts to communicate disapproval of certain actions of other states. For instance, the UN imposed economic sanctions against apartheid South Africa, Haiti, Iraq and the Yugoslav Federation on different occasions.

Over the years, sanctions have been imposed by the unilateral effort of the US against Cuba, Libya, Nicaragua, and Iran, and in the 1990s, limited or partial sanctions were imposed or threatened against China and Nigeria.

In each case, it is arguable the extent to which the desired outcome from sanction was realised. It seems clear that economic sanctions are used in the same way military interventions are used, i.e., for country A to do something she would not ordinarily do for country B, thereby expressing B’s power or influence over A.

In that respect, “other technique of statecraft even begins to approach international trade for effectiveness in promoting important foreign policy goa1.’’ Consequently, ceteris paribus, the US’ importation of about 50 percent of Nigeria’s crude petroleum export (a form of international economic exchange) becomes a spectacularly important and therefore effective instrument of statecraft for both states to influence decisional outcomes in me preferred direction.

Clearly, the target states (which sanctions are expected to reward or punish) are not all equally affected by the scope of the instruments as well as me extent to which each country can sustain and adjust to external pressure for domestic change.

For example, China is more able to adjust to a US’ sponsored economic sanction against her than could, for instance, Cuba. China is both economically and militarily diversified and has more options for imports and exports of goods and services as well as the ability to defend itself within the Asian reglon.

On the other hand, Cuba is a much smaller country located 90 miles off the coast of the US, depends on a mono-cultural economy and is much weaker in defending itself than China from external threats. Therefore, although home countries remain sensitive to external pressure for a change in their domestic and external policies, Cuba is more vulnerable than China and therefore more likely to be negatively affected by economic sanctions if her friends do not come to its ald.

Also, the anti-apartheid sanctions against South Africa did not initially lead to the desired expectation that the white-dominated South African government would change its policy toward indigenous South Africans.

The desired result was achieved because of the cold war ideological structure that served the interests the US and those of the now defunct USSR. Consequently, US’ stout support of apartheid in South Africa delayed the impact of the multilateral sanctions on South Africa.