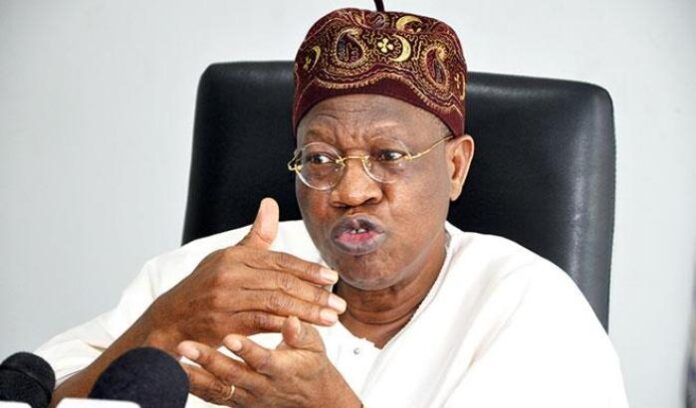 Information and Culture Minister, Lai Mohammed, has said that despite ongoing calls for President Muhammadu Buhari to quit office as the Nigerian leader, the president will not yield to the demand of the political sovereigns

Northern Elders Forum (NEF) has been advancing reasons why the group wants President Buhari to step aside, citing worsening insecurity and looming famine in the country.

Northern Elders’ Director of Publicity and Advocacy, Hakeem Baba-Ahmed, says under the Buhari administration, ‘’life has lost its value, and more and more citizens are coming under the influence of criminals.

But, Mohammed is saying before the president assumed office, Boko Haram could stroll into any city, especially in the north, to carry out deadly attacks, pointing out that Abuja, the country’s capital, Kano, Maiduguri, Jos, Damaturu, and so on were regularly targeted while motor parks, churches, mosques, shopping complexes were not spared.

Mohammed stated that suicide bombers used to have a field day detonating their bombs and killing innocent people and Boko Haram used to occupy territory, deposing and installing Emirs and collecting taxes.

He said all that had become things of past and the changes were not mere happenstance, but part of the successes recorded by the military, under President Buhari

“Therefore, calling on the President to resign every time there is a setback in the war on terror is a needless distraction and cheap politicking.

“Let us stop playing politics with the issue of security,’’ he said.

The minister reiterated the position that “Boko Haram is today badly degraded and can only carry out cowardly attacks like the one against defenceless farmers over the weekend’’.

He said no nation, no matter how powerful, is immune to attacks on soft targets. ‘’For instance, 9-11 happened despite the prowess of the most powerful army in the world. Boko Haram’s only oxygen today is publicity. That’s why they have rushed to release a video claiming responsibility for the killing of the farmers.

“Please note that that video was shared to instil fear in the civil populace and maintain relevance in the eyes of their sponsors’’, he said.

Mohammed stressed that the killing of defenceless farmers was an act of cowardice and savagery by a group of deranged terrorists, adding that the killing is not a true reflection of the progress being made by the military against Boko Haram.

“That Boko Haram is going after soft targets is a sign of weakness and desperation on their part, especially after they have suffered huge setbacks in the hands of the military in recent times.

“The modus operandi of a losing terror group is to go after soft targets in order to stay relevant. The minister appealed to the general public to provide information about the insurgents to security forces to assist them in ending the war on terror”, he said.

Insisting, he said the call, in some quarters, for the resignation of President Muhammadu Buhari over the recent killing of farmers in Borno State by Boko Haram terrorists is “cheap and irresponsible’’.

Mohammed was, however, speaking during a meeting with members of the Newspaper Proprietors’ Association of Nigeria (NPAN) on Thursday in Lagos, the commercial capital of Nigeria.

The meeting was attended by the President of NPAN and Publisher of ThisDay newspaper, Nduka Obaigbena, veteran Journalist and former Governor of Ogun state, Olusegun Osoba, publisher of  Vanguard newspaper, Sam Amuka-Pemu, NPAN General Secretary of NPAN and publisher of The Source magazine, Comfort Obi, publisher of Nigerian Pilot, Dennis Sami, and representatives of Daily Sun’, The Nation, Daily Trust, and Daily Asset newspapers, among others attended the meeting.

Continuing, the minister said: “In the wake of the killing, there have been calls in some quarters for Mr President to resign. Well, let me say here that this call amounts to playing dirty politics with the issue of security, and it is cheap and irresponsible.

Responding on behalf of other members of association, Obaigbena thanked the minister for the visit noting that “it is an unusual time for the country as Nigeria is in crisis of insecurity across the country’’.

He noted that it is not time for blame game or politics but how to collectively find solutions to the security situation.

Obaigbena assured that the media would work with the minister and the government at large to deal with the situation.

While Mohammed was busy speaking in Lagos, dare-devil gunmen were also busy rupturing the peace of Edo State. Eye-witnesses say they took over the ever-busy Benin-Ekpoma-Auchi Road, abducting some commuters in the attack.

After seizing a commercial bus, the kidnappers allegedly forced the passengers to disembark and led them into a bush. The driver was reportedly made to block the road with his bus in an attempt to force oncoming vehicles to stop.

“What happened was that the gunmen first attacked a commercial bus at the Urhokosa/Obagie end of the road and took a number of passengers into custody.

“The operation was well planned, as the suspected kidnappers divided themselves into groups. A group led the first set of victims into the bush, while a second group forced the driver of the bus to use the vehicle to block the road.

“Other vehicles that ran into the traffic jam caused by the blockade were attacked by another group of the kidnappers, who selected victims and marched them to join the earlier captured passengers in the kidnappers’ den,” the source added.

A member of a vigilance group in the area was reportedly shot dead when he attempted to disrupt the operation.

A motorist, who claimed to have abandoned his vehicle and run into the bush to hide, said he met other people who also escaped into the bush.

He explained that the gunmen shot continuously for a long time without any resistance from security agents.

He said, “Yes, the command is aware of the kidnap, but we have yet to ascertain the number of passengers that were kidnapped.

“A vigilance group in that community engaged the kidnappers and one was killed. Effort is currently ongoing to free those kidnapped. Other information will be revealed as we progress.”

In the mean time, Governor Samuel Ortom of Benue state says Nigeria is not getting it right on all fronts because greed and sentiments have taken the centre stage in the affairs of the country leaving the people impoverished amid worsening security challenges.

He said the country has been plunged into serious security, socio-economic challenges because those entrusted with the leadership of the country have abandoned the path of truth, equity, fairness and justice.

The governor was speaking when he played host to the former Imo State Governor, Senator Rochas Okorocha, in Makurdi, the state capital, pointing out that there was urgent need for leaders to retrace their steps and do the right thing to move the country forward.

“With the challenges we are facing at the moment, this is certainly not the time to talk of political parties and politics in this country. Things are certainly not going right in our country let’s not deceive ourselves.

“The World Bank prediction a looming economic crisis in the country and advised that we paid greater attention to the productive sector of our economy. And I advise that we should not treated the advise with levity.

“We must do all we can to ensure that we do not become the poverty capital of the world. Lets get it right for the sake of our children and stop this selective fight against corruption where those who steal billions work the streets free but those who steal chicken are sent to jail”, Governor Ortom said.

Earlier, Okorocha said he was in the state to condole former Minister of Steel and elder statesman Wantaregh Paul Unongo, who lost his wife recently, and commended Ortom for his forthrightness and development efforts in the state.