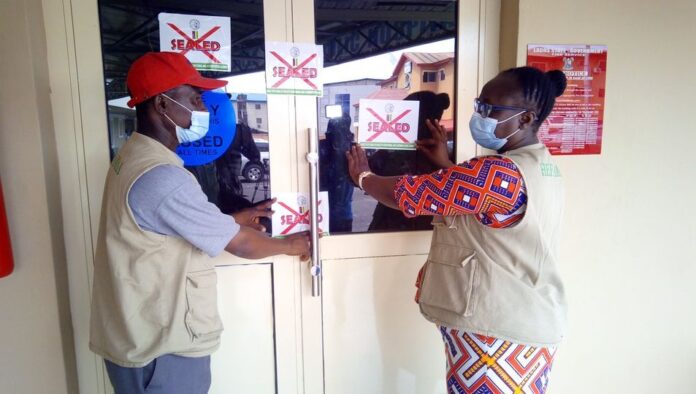 The Lagos State Health Facility Monitoring and Accreditation Agency, HEFAMAA, on Friday, sealed Ancilla Catholic Hospital located at 1/3, Odumosu Close, off Iju Road, Ifako-Ijaye, noting that the move was to safeguard the health of the citizenry and sustain the battle against quackery in the system.

A Director in the Agency, Dr. Godswill Iboma, who led the Monitoring and Inspection team, disclosed that the facility is not run in the best interest and wellbeing of the patients admitted, adding that the hospital is also yet to complete its registration with the government.

“We are sealing this facility in the best interest of the general public because it is not being run in an ideal way in line with stipulated health guidelines. The well-being of the patients admitted is also at risk as the situation in the facility may worsen their health condition. It must also be noted that the hospital has not completed its registration with the government”, he explained.

While assuring that the Agency will leave no stone unturned in achieving the vision of the Governor Babajide Sanwo-Olu led administration in the health sector, Iboma vowed that the State government will not tolerate unprofessional practices which could put the health and the wellbeing of the citizens in jeopardy.

He warned that any healthcare facility owner or operator found perpetrating unprofessional acts will be prosecuted accordingly and the facility sealed, pointing out that “The government is investing a lot in qualitative healthcare delivery, therefore we all must support and cooperate with the government to achieve qualitative, accessible and affordable health for all”.

The Director, however, advised the public to be vigilant and patronise only Government accredited health facilities with the Agency’s logo or proof of registration and report those behind illegal operations for prompt action.