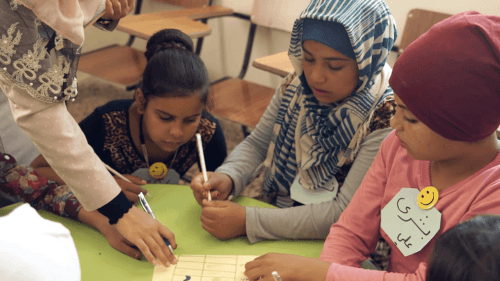 At this year’s Supporting the Future of Syria and the Region conference on June 30, concerned rights activists were busy pressing international donors and humanitarian agencies to work with Jordan and other countries hosting Syrian refugees.

Majority of Syrian refugee children in Jordan do not have the chance to go to secondary school, close to a decade after they arrived in the country.

The 61-page report, “‘I Want to Continue to Study’: Barriers to Secondary Education for Syrian Refugee Children in Jordan”, documents increasingly difficult obstacles to education the further Syrian refugee children progress in school, with enrollment rates collapsing from nearly 90 percent in primary classes to just 25 to 30 percent in secondary school, according to government and the United Nations data.

Children’s Rights Fellow at Human Rights Watch and author of the report, Breanna Small, says “a vast majority of Syrian refugee children lose the chance to study and learn before they even get to high school.

“For years, donors have promised to prevent a lost generation, so at this year’s Brussels conference they need to move beyond pledges and ensure that secondary education is the norm and not the exception for Syrian children.”

The 233,000 school-age Syrian refugees in Jordan face multiple obstacles to education that are most acute for children ages 12 and older, including poverty-driven child labour and child marriage, lack of affordable school transportation, government policies that limit access to education, and the lack of inclusive education that keeps children with disabilities out of school.

Rukaya, 17, one of the 45 Syrian children whose educational experiences Human Rights Watch documented, taught herself fluent English and hopes to major in mathematics at university.

But her family, unable to pay rent, received an eviction notice, and then the UN refugee agency, lacking funds, cut their rental assistance. Rukaya greatly feared that her family’s financial circumstances meant she would have to drop out of secondary school. “I want to continue to study,” she said.

For the majority of children forced to drop out, there is often no way back to formal education. The only pathway for children ages 13 and older is a program certified by the Education Ministry that enables children to complete their compulsory, basic education, study at home for classes 11 and 12, and then take the final secondary-school examinations. But in 2019, just 3,200 Syrian children were enrolled.

Jordan and international donors should dramatically scale up non-formal and informal education programs to reach many more children who are already out of school and support them to complete secondary education, Human Rights Watch said.

From 2016 to the end of 2019, donors contributed $356 million toward the $522 million that Jordan’s response plans budgeted for refugee education, Human Rights Watch calculated.

Access to secondary education is dire for Syrian refugee children throughout the region, according to UN and government data. In Turkey, 27 percent of Syrian children reach upper-secondary school; in Lebanon, fewer than four percent do.

In May, Human Rights Watch wrote to key donors – including the EU Commission, Germany, the United States, the United Kingdom, Canada, Norway, and Denmark – asking them to improve access to secondary education for Syrian refugee children in these countries, and Iraq, a key priority at the Brussels conference.

All children, whether migrants, refugees, asylum seekers or stateless persons have the right, to access quality education without discrimination, including secondary education.

Even before the coronavirus pandemic increased Jordan’s dependency on foreign aid, nearly 80 percent of Syrian refugees lived below the poverty line of 68 Jordanian dinars per month (around $96).

UNICEF has a programme that supports families to keep their children in school, but slashed it from 55,000 children in 2018 to 10,000 in 2019 due to budget cuts, leading to dropouts.

Syrian families said that children – particularly girls – who could not afford school transportation dropped out due to harassment while walking to school.

According to Small, “Jordan’s government is rightly proud of getting most Syrian refugee children into primary school, but Jordan needs to ensure they can stay through secondary education, which is indispensable in today’s world.

“Donors at the Brussels conference should realise that the failure to continue educating Syrian refugee children through secondary school undermines the progress made in primary education.”