• Declares policy not yet implemented, insists 2015 polls will be better

IN a fresh defence of the policies of his agency, the Chairman of the Independent National Electoral Commission (INEC), Prof. Attahiru Jega, Wednesday declared that there was no hidden agenda in the  creation of 30,000 additional polling units.

He said that the commission’s decision to re-configure the structure of the polling units as well as create additional ones was driven by collective aspirations of Nigerians to improve upon the electoral process for free, peaceful and credible elections in 2015 and beyond.

“There is no sectional or parochial agenda in this decision.  It is to decongest over-crowded polling units and disperse as evenly as possible among all the polling units. To locate polling units more effectively within commuting distances of voters, given that movement is usually restricted on Election Day. We are creating additional polling units to cater for the splitting of large polling units as well as new settlements not serviced by any existing polling units.”

The INEC boss said that the commission had approved the creation, but that this had not come into operation as being insinuated in some quarters.

On why INEC did not rely on post-business rule register of voters as the baseline for the calculation of the number of polling units, the chief electoral officer made it clear that there was no such document yet.

He said: “At the end of the registration of voters in 2011, the commission announced that the data of 73.5 million eligible voters had been captured warts and all, that is, including the records of multiple registrations.

“At the conclusion of the data de-duplication with the Automated Fingerprints Identification Software (AFIS) by which cases of multiple registrations were eliminated, the figure came to 70,383,427 registered voters.

“These are genuine, non-multiple, identifiable registrants and potentially eligible as voters. It was based on these figures that the commission approved the creation of additional polling units.”

He further disclosed that with regard to security INEC had done something innovative.

“On the eve of 2011 general election, we created what we called an interagency consultation on election security where all the security agencies in the country meet together with INEC and periodically will review security arrangements, what is to be done, what has been done, what are the challenges and  how  we can prepare to factor them into subsequent elections.”

He assured Nigerians that the 2015 polls would be better than previous ones and that the commission was working assiduously to reduce, if possible eliminate, the challenges confronting elections in the country.

Jega who spoke during a visit to the Rutam House, the headquarters of The Guardian newspaper in Lagos yesterday, disclosed that the commission under his leadership had made tremendous improvement in the conduct of free and fair elections, considering that the country had witnessed drastic reduction in the number of election petitions since 2011.

He acknowledged that security had remained a systemic challenge in the conduct of free and fair elections, but stated that the commission in collaboration with the political parties and security agencies were working towards tackling this problem during elections.

“INEC is not a security agency. We have to rely on security agencies for advice and support in order to ensure that voters come out with the confidence that things are okay for them to vote. We also have to rely on them to secure our staff and materials when we deploy for election,” he said.

He added that on the security arrangement a lot had improved since 2011.

“Which means that the security arrangement for 2015 is also likely to be qualitatively much better than it was in the 2011 general election.”

He recalled that INEC prepared to conduct election in Adamawa when the court order came saying that they must suspend the election and the deputy governor should be installed as the governor.

“We are prepared to do election anywhere in the country as an election management body. But we will need the support, the encouragement and the resources as well as resourcefulness of the security agencies to enable us to do this successfully without

Challenges to the voters, our staff and the materials we use for the election.”

The INEC boss is hopeful that by 2015 all the security challenges in the three states (Yobe, Borno and Adamawa) would have been either eliminated or reduced.

“Such that we would be able to conduct credible election in this country. We have done enough for INEC to conduct successful free and fair election come February 2015,” he said.

He recalled that people had cited Ekiti and Osun states elections as regards militarisation.

“In Ekiti and Osun while the police deployed almost 10,000 or more policemen, there were no more than 1,000 military personnel during the election, so you cannot talk about militarization of the process. The troops were there but they were much fewer in number and their role was clearly defined.”

According to Jega, the military has nothing to do with the electoral process. The troops  man the checkpoints to ensure that the states are not infiltrated by people who could cause trouble. They are also there to contain any security challenge beyond the police.

“Secondly, people said that the militarization in Ekiti and Osun disenfranchised voters in those states. Again, if you look at the statics actually the presence of the police and the military ensured a higher turnout than all governorship elections we have conducted in this country.

“Until we did the Ekiti election, the highest voters turnout in the eight governorship election we did since 2011 was less than 30 percent. In Ekiti the turnout was higher. In Osun State it was higher more than 67 per cent. So if the presence of security operatives will disenfranchise voters why is it that we have seen more people coming out to vote?”

He regretted that leading elite were culprits of election offenders, they seemed  not to be committed to respecting  the rule of the game.

“When we came in 2011 no single case seemed to have been prosecuted for election offences. We have prosecuted about 200 cases while we have over one million cases that are in different stages.

“Unfortunately, INEC does not have the capacity to prosecute about one million people. Every time we are in court, we have to get our lawyers to do that. But we do not have enough resources and our court processes are still very slow. “

He disclosed that in some of the offences,  there were no clearly defined punishment for committing them.  He said that it was important to set up an electoral tribunal but  that this could   only come   by law.

Jega said that despite these challenges, things were improving. “Those are the ones that we will continue to deal with. Now you can steal a ballot box but there is no way you can bring it back to be counted. We must keep hopes alive. We must keep on doing our best in the reform process.  We need all the stakeholders to also do their best. Since 2011 the roles of the security agencies had changed. They did not assist in election malpractices again.

“We have actually initiated many reform measures. We have cleaned up the voter registers that we created before 2011 general elections. We have produced permanent voters’ cards. As I speak with you we have distributed them in the FCT and 22 other states and in all of these states we have also done continuous voter registration and updated the registers. Remaining now 12 states, and we have already announced the timetable for the distribution of the remaining permanent voters’ cards and the conduct of the continuous voters’ registration in this 12 remaining states.  By the end of November we would have distributed all the permanent voters’ cards and we have done the update of the register in all the states in the federation and in the FCT.

“It is not a perfect register. People have this impression that a register must be perfect. There  is  nowhere in this world where there is a perfect register. The cleaning challenges are always there. In the last minute somebody will die. His or her name will still be on the register at the time he did the election.  In the advanced software identification system that we use, whatever you do there is always the possibility that it will miss some duplicate because it is not one hundred percent perfect. It is at least 98 per cent. We have come a long way.”

“Unfortunately, many people are now saying I am trying to grab more power to be commander-in-chief but it is not true. Somebody recommended it and the National Assembly seems to have accepted it.” 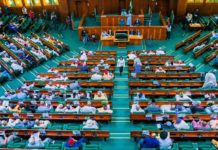