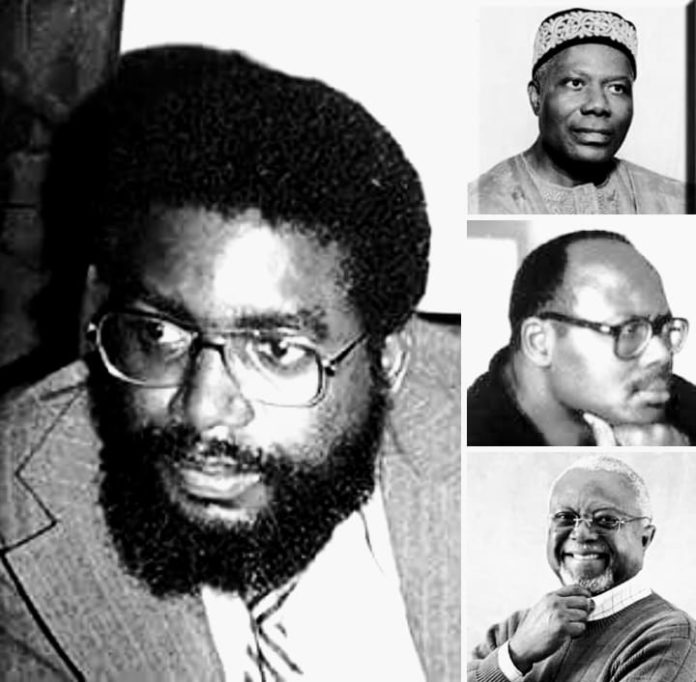 Historical verdicts are not given on the rudiment of neutrality. One must render judgment based on where he/she stands on critical historical issues of the day. It is on this epistemological praxis that we as leftwing students’ radicals have decided to cast our lots with men and women who paid the ultimate price in struggling for the dignity of our people and the social transformation of the fatherland to build an egalitarian society based on justice, and equality.

We choose to do so, not on the conceptualization of how much material wealth they have, or the backgrounds; be it ethnicity or religious affiliation, but their insurmountable and altruistic struggles for the upliftment of the masses of the people based on their rich inherited African traditions and cultures. We unapologetically do so with the understanding of their vigorous gallantry in confronting the bankrupt and hyper- insensitive ruling cabal of their time for an aperture of the system for the full participation of the people in the ruling of the destiny of the state.

The progressives’ struggles broaden the stage for what we call democratic pluralism wherein everyone now has the inalienable democratic franchise to elect their leaders without paying properties tasks or being part of certain families and churches. Their struggles made it possible for us all to be here today, where we can criticize and question the ruling establishment of the day on the expansions of the common-wealth (natural resources) of the state and the social welfares of the people (standard of living and well-being) and even the decisions making processes and instruments of the state.

Progressives’ struggles made it possible for an ordinary men names like; Kollie, Flomo and even a Kamara like me to now attend universities and colleges without assimilation to be a Jones or Johnson, for it was not like this in the 1950s, 60s and 70s. Our parents changed their names during those days before gaining education or to even become somebody. Today, we don’t need to pass through this humiliation of identity anymore, for men have paid the price through sweats and blood. We must be very appreciative for this, for they (progressives) saw it as a historical obligation which was inherent upon them to accomplish.

With the delegation of a pernicious system (the True Whig Party), that distributed parsimony, disease and injustice on the mass of the people, by keeping them shackles and chains, and the society as well in stasis (constant stagnation) with no development regardless of the vast economic growth after the second world war, was a system that was needed to be fought with all filaments of the bodies men who had the fortitude of unearthing the contradictions in this society. A form of Apartheid which inflicted indignities and dishonours on the people; by impoverishing them on the mines and plantations of foreign monopoly capital and its cooperatives. It was with the understanding that progressives decided to struggle against the one hundred and three years minority rule of the True Whig Party.

Former slaves who came from America and the Caribbean were the ones subjugating people to the same sardonic and hostile treatments they had undergone in slavery. And this was the beginning of the tragedy. In Africa where young men were struggling to redeem themselves and to win their freedom and independence from colonial rule, for example, the peasant’s heroic struggle in Mozambique headed by Eduardo Mondlane and Samora Machel, Kwame Nkrumah in Ghana, Almicar Cabral in Guinea Bissau, the black struggle in South Africa and the white domination led Mandiba Nelson Mandela and here in Liberia, we had conmen cogitating they were going to keep ruling the society holding all these factors in inertia as the grandfathers had ruled in the 1850s with their false pretence and bankrupt Christendom.

For progressives, it couldn’t be. So they dedicated their lives to the struggle of restoring the dignity and honour of the people; by agitating against the vices gyrated against them. The exploitations of the people’s labour on LAMCO, Bong Mines, Liberia Agricultural Company (LAC) etc. by the foreign monopoly capital that pay them a diminutive wage that couldn’t provide them decent housings, good health care or even educate their children needed to stop! The people couldn’t continue to ruin in tatters and wallow in the cesspools of hardship while the ruling clique and their foreign exploiters maximize wealth at their expense.

The minority domination needed to be prohibited with immediate effect. The resources needed to be distributed with equity to reflect in the material outlooks of the people to make them feel a sense belonging. To provide decent housing, quality education, and affordable and good health care for the people.

So yes, they placed their lives down in defence of the people against these vices, and they paid the price.

We are cognizant that some elements have tried in their Sisyphean and futile quest to distort this irrefragable struggle of the progressives by machinating sophistry to dissipate this glorious history in obscurity, especially the remnants of the old order who are still acerbic with them (the progressives) for rallying the sons and daughters of the people to bring to terminus their bankrupt hegemony. We too (neo-progressive will continue to dauntlessly provide historical clarifications at any time for the better understanding of the people.

Out of acrimony, they have regurgitated platitudes with broad historical implications that progressive came and rationalized the minds with people with radical foreign ideologies ( like Marxism) that led to the destruction of the country. This is not fractured, and we ask the questions of what is radical and foreign of a man agitating for decent work for his people? What is radical of a man wanting decent housings for his people? What is radical and foreign of a man calling for an equal and just society? You know, whenever power is taken from those who arrogate onto themselves the arrogance that power belongs to only them, they never rest to burry that history in darkness. So we don’t pester them writing their fabricated history of calumny, for as long we are alive and healthy, we will continue to sharpen and erect the necessary checkpoints to contradictions rabidly and rambunctiously.

Some of them with aplomb ignorance have even said, that progressives brought the civil unrest that led to the vandalization and bastardization of the state and many people have accepted this fallacious information because of the illiteracy inflicted on them by these very people who felt that education was a privilege and not a right, so only them knew the values. This has no iota of truth. Progressives did not form any rebel group that participated in the fourteen years civil war that exterminated the state, nor even supported any warring faction. They (the son and daughters of the True Whig Party) were the ones that came for revenge; to take back the power they felt belongs to them. So there is no truth in this. And we asked the question, how will men with political and ideological consciousness plan insurgency to wreck the lives of the very to the people they were struggling on behalf of?

Of course, Liberia was alright, alright for those who were in power. Alright for the oligarchy, progressives did not create WestPoint or New Kru Town which are the Bermuda of unimaginable poverty. Progressives did not constitute these slums and ghettos for the people. They only interpreted these tragic circumstances to the people, by enlightening them to fathom the trajectory of history as they were already experiencing these poignant sufferings on the mines and plantations. So how does a poor hungry man understands that the riches accumulated by ruling families were done through his sweat and blood? In any society where wealth is so secured, where two or three per cent of the society controls and siphons the resources of the state, that a recipe for conflict, you don’t need a rocket scientist to narrate this to you. So don’t blame progressives for the destruction of the society, blame your history. Blame your history of inequity, of arrogance, and hoarding of the people’s children.

For us, we have identified our heroes. We will not kowtow to the reactionaries’ interpretations of history. We have no regret for these men struggling to destroy the hegemony of the True Whig Party. We say here, they were men of conscience. They went to school. They could have chosen to work with the oligarchy. As a matter of fact, some of them had parents in authority. But because they choose to struggle, that has made all the difference. It was Frantz Fanon that said, “Every generation, must out of relative obscurity discover its mission, fulfil it or betray it”. And so, these men struggled within the context of their time to bring the impious regime of one hundred and three years dominance rule of the True Whig Party. Now if someone asks the question of any regret by the progressives of the overthrow of oligarchy, we will answer them by saying, is there a hungry man that regrets the opening of a store for free food? There is one thing we will never do while confronting the historical revisionists. We will never allow them to make us feel guilty of that which they were a part of that was resisted by the progressives. We will never be rueful for that.

In an arduous effort to make our generation understand and get the graph of what transpired in our society and the immutable struggle resilience of those who open their chests to the bullets in confronting the injustices carried out against our people by the TWP hegemony, we remain staunch and rabid. We don’t need anyone to tell us about the progressives. They are our heroes and we will at all-time commemorate them and eulogies their selfless struggles in combating the social vices in the homeland. He will waver nor flinch. We will struggle until the last breath!

About the author: Gammal Jusu Kamara III is a leftwing student radical reading political science with an emphasis in international relation at the University of Liberia. He is a militant of the Revolutionary Vanguard Student Unification Party. He is also a member of an emerging radical leftwing political party in the homeland; The Movement for Social Democratic Alternative (MOSODA). He can be reached via jusukamara100@gmail.comand 077654997.