I was born gay and even in death, I will be gay – man declares

In what has left many people asking questions, a Nigerian gay rights activist, Bisi Alimi, has disclosed that he was born gay, adding that religion was forced on him.

In a social media post, the activist said he was taught religion and can unlearn it. But as for his sexual orientation, he said he was born gay, and even in death, he will be gay. 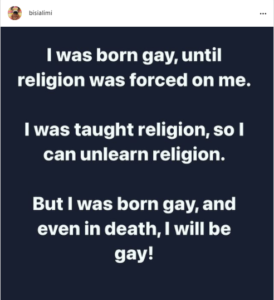