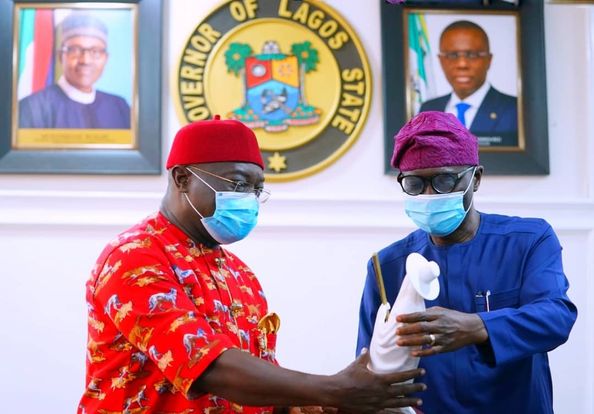 Abia State Governor, Okezie Ikpeazu, has said that the attacks on public assets and private businesses in Lagos State in the heat of the #EndSARS protest were orchestrated to hurt the whole country.

The Governor, who condemned the arson, stressed that Lagos remains a home for all Nigerians irrespective of tribe, language, or religion.

Ikpeazu spoke on Wednesday during his visit to Lagos to commiserate with Governor Babajide Sanwo-Olu over the attacks.

The Abia Governor particularly thanked his Lagos State counterpart for protecting the businesses and properties owned by Igbo during the violence.

Ikpeazu said: “I am here to commiserate and show my concern to my brother, Governor of Lagos, over the event that happened some two weeks ago. I’m particularly touched by the level of destruction, which will hurt all Nigerians living in Lagos. This is because Lagos is home to all; as a commercial city, it is a place where everyone speaks the same language.

“I want to particularly thank Gov. Sanwo-Olu for giving protection to our brothers from the Southeast during the crisis. This is an indication that our people and their businesses are safe in Lagos. We will continue to live as a united country. With all of us working together, we can keep flourishing.”

Gov. Ipkeazu urged Igbos living in Lagos to continue to abide by the laws of the State and eschew actions that may cause mistrust between them and members of their host communities.

He said the political leaders had drawn a number of lessons from the recent youth protests against police brutality, adding that Governors were now inclined to drive up inclusion in their policies and programs.

Sanwo-Olu thanked the Abia Governor for taking the pain to travel down to Lagos from the Southeast to identify with the residents over the violence. He promised that Lagos State Government would continue to support business aspirations of the Igbo and protect their rights to live in Lagos.

Also, indigenes of Southeast and South-south living in Lagos paid a solidarity visit to Gov. Sanwo-Olu at the Lagos House, Alausa.

The Igbo leaders, who were led by the Governor’s Special Adviser on Drainage and Water Resources, Mr. Joe Igbokwe, restated their commitment to the growth of Lagos while aligning with the move to rebuild the destroyed assets.

Igbokwe said a true Igbo son could not have been part of those who set fire on the public assets, stressing that Igbo people are known as builders.

He said: “The attacks are unimaginable in terms of cost and worth. There is nothing that can make a true son of Igbo participate in the destruction of the land where our businesses have been most successful.

“There is an adage that says you cannot go and pass faeces where they put your food. We pledge our loyalty and stand by the Government and the people of Lagos.”

Leader of the South-south indigenes in Lagos, Otunba Isaac Emiyade, said he had lived in the State since 1977 and had never witnessed public protests in which public assets were destroyed at such level.

Emiyade lauded Sanwo-Olu for promoting cohesion among all ethnic nationalities cohabiting in Lagos, pledging that people of South-south residing in the State would continue to support the move to strengthen peace and progress of Lagos.

Responding, Sanwo-Olu said diversity remained the State’s strongest point, pointing out that the spirit of Lagos to host visitors and be a melting point for all ethnic groups had not been dampened, despite the violence visited on the State.

“One of our strongest points is our diversity. We must not allow what happened to demoralize our spirit to undertake the responsibilities which the State has taken up. Lagos will continue to give everybody living here equal opportunity,” Sanwo-Olu said.