Former President Olusegun Obasanjo was in Aso Rock yesterday where he met with President Muhammadu Buhari behind closed doors.
After the meeting which lasted for about an hour in the president’s office, Obasanjo was escorted to his car by Buhari but he would not speak with journalists
But LEADERSHIP gathered that visit by the former president was not unconnected with his mission to Guinea Bissau where Buhari had appointed him as special envoy in that country’s political crisis.
A close source at the meeting said Obasanjo was at the Villa to brief the president on the outcome of his visit to Guinea Bissau where he was assigned to restore constitutional order.
The prime minister of Guinea Bissau, Mr. Domingos Simoes Pereira, and his cabinet were dismissed by President Jose Mario Vaz who proceeded to appoint and swear in a new prime minister in the person of Mr. Baciro Dja.
In a statement by his spokesman, Mr. Femi Adesina, President Buhari had lamented that this development, which happened while Obasanjo was still consulting with President Jose Mario Vaz of Guinea Bissau, had worsened the political situation in the country.
Buhari appealed for calm and called on the leadership in Guinea Bissau to exercise utmost restraint and ensure the maintenance of law and order as efforts were ongoing to resolve the lingering crisis.
Buhari then sent former President Olusegun Obasanjo to help find a solution to the crisis.
Obasanjo had embarked on the first leg of his mission by consulting with the current chairman of the ECOWAS Authority of Heads of State and Government, President Macky Sall of Senegal, in Dakar. 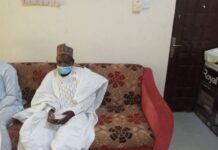