An official of the Federal Road Safety Corps (FRSC), Segun Enikuemehin, who dared to ask some military men who were assaulting a civilian to desist from such a dastardly act is currently at the Lagos State University Teaching Hospital (LUTH) with one of his eyes totally damaged.

The incident occurred on Sunday afternoon when Mr. Enikuemehin came upon the military men beating a harmless civilian,reports Sahara Reporters.
Convinced that the military officials would beat the man to death if nothing was done, he reportedly walked up the angry soldiers and pleaded that they let the man go or hand him over to the police if he had done something illegal.

The military men would not take such effrontery lightly as they descended on the Good Samaritan and started beating him as well.
But not even the beating from the soldiers would discourage him, and he managed amidst his own beating to rescue the already battered man, whom he then took to the Adekunle Police station at Ebute Metta.

Sources say that thereafter, Mr. Enikuemehin led the police back to the venue of the incident. Upon sighting him in the company of the policemen, the soldiers, who were by that time already cooling off at a nearby beer parlor, became even enraged and descended on Mr. Enikuemehin, during which they eye was plucked out.

The damaged eye was reportedly picked from the ground and the man rushed down to the General Hospital.  Rejected upon arrival by that hospital, the blinded man reportedly asked that he be taken to LUTH. 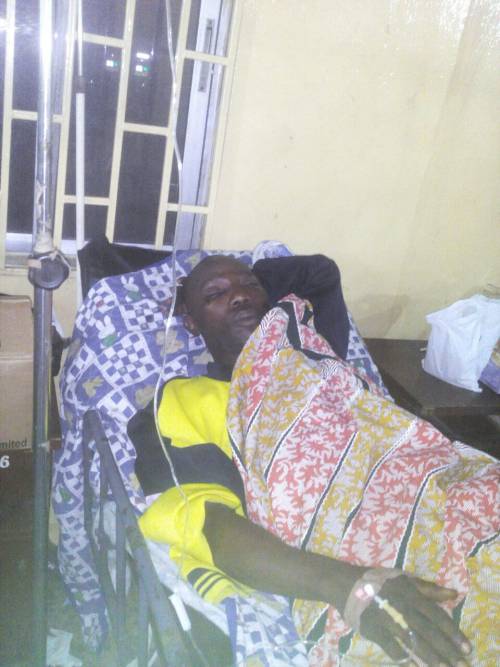 Meanwhile, the soldiers, upon realizing what they had done, were said to have taken to their heels but were overtaken by residents and handed over to the police.
The story got messier when a relative of the stabbed Federal Road Safety Officer went back to the police station only to find that the military men had already been released by the police. While still digesting that development, one of the accused soldiers walked into the station in the company of a senior officer who was identified as Captain Okoli.

Speaking to SaharaReporters, Mr. Enikuemehin’s Uncle, Prince Ojatunwse Oluwajoba, said the DPO of Adekunle Police Station informed him when he got there that the soldier who stabbed his nephew had been handed over to the military authorities. He said that soldier, who had been in civilian clothes when the incident happened, arrived at the police station with Captain Okoli to collect his identity card and other personal effects that had been taken from him at the station.

According to Mr. Oluwajobaa, doctors at LUTH are now saying his nephew’s left eye has been completely damaged and that the second eye might be affected as well if proper medical care is not given.