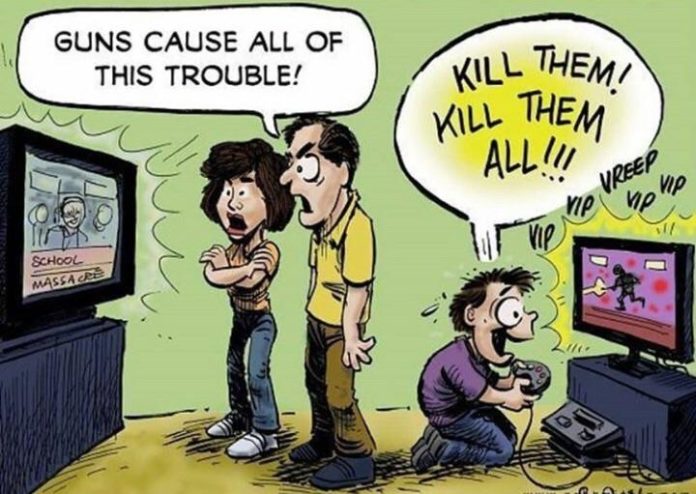 The din struck by videos of the gaming variety; its forced causal link (always alleged, never proved) to altering conduct, continues its relentless march across the discussion forums in the United States and beyond.  The almost casual butcheries – actual, not as opposed to digital – have gone on unabated, the next extremist taking a murderous shot at his role in history – and everybody else.  Now it is the white supremacists who are sharing top billing with previous jihadi enthusiasts, a concession on the part of law enforcement authorities that there might be something to say about using the word “terrorist” in an ecumenical sense.

The August 3 shootings at a Walmart store in El Paso, Texas and Dayton, Ohio, left over 30 dead and 53 injured.  The profiles of the shooters were subjected to a less than thorough dissection.  A twenty-one-year old Patrick Crusius had allegedly driven from Dallas-Fort Worth to El Paso in the hope of targeting Mexican immigrants.  For Connor Betts, motives seemed sketchy, though he was noted for having a Twitter account showing much support for Antifa and an interest in “exploring violent ideologies”.  Much is being made of his drug addled state at the time of the shootings.

The taking of sides over the whole calculus of violence took place in a matter of hours.  For those insisting on gun control, lax rules enabling the easy acquisition of weapons of mass lethality were fundamental, with Texas taking the lead.  Racism and xenophobia were also blamed.

For gun worshippers, the culprits were violent celluloid, naughty video games, hideous media.  Even as the casualty lists were being compiled, Fox News host Jon Scott suggest suggested that the El Paso shooter was merely another youth raised on a diet of violent video games that might propel him to take to guns.

Texas Lieutenant Governor Dan Patrick speculated that the killings were the bloody realisations of a video game, a desire on the part of the shooter to “be a super soldier, for his Call of Duty game.”  But there was a bit more to that: God’s banishment from society, the one and only deity being cast out for most of the week, unable to exert His moral authority.  “As long as we continue to only praise God and look at God on a Sunday morning and kick him out of the town square in our schools the other six days of the week, what do we expect?”

House Minority Leader Kevin McCarthy claimed on Fox News’ Sunday Morning Futures that video games dehumanized participants, turning them into insentient zombies.  “We’ve watched studies show what it does to individuals, and you look at these photos and how it took place, you can see the actions within video games and others.”

President Donald Trump, as he did in the wake of the Marjory Stoneman Douglas high school shooting in Parklands, Florida, lamented the “glorification of violence in our society”, which included “the gruesome and grisly video games that are now commonplace.  It is too easy today for troubled youth to surround themselves with a culture that celebrates violence. We must stop or substantially reduce this, and it has to begin immediately.”

The president also had room for that old straw man Fake News which “has contributed greatly to the anger and rage that has built up over many years.  News coverage has got to start being fair, balanced and unbiased, or these terrible problems will only get worse!”

Some common ground is found in commentary suggesting that Gamergate holds the toxic key – at least when it comes to understanding white nationalist trigger happy types. Founded in a campaign of coordinated harassment in 2014 against female video game designers and gaming critics, the Gamergaters migrated from the 4chan image-based website to 8chan.  (4chan had tired of the harassing troupe.)  Evan Urquhart duly stretches the bow in his Slate contribution.  “This subculture of Gamergaters, who erroneously believe themselves to be the only true gamers in the world in a world of phonies, is what made the culture of 8chan what it is.  It was violent then, it it’s more violent now.”

If only it were that simple: the moving image would be banned; the provocative print would be stored away in inaccessible troves; online forums would be banished.  But as tens of millions of humans happily engage with such matter without incident on a daily basis, the prosecution is left floundering on this point.

In the 1950s, psychiatrist Fredric Wertham pushily decided that comic books were needlessly imperilling readers (perhaps viewers is more appropriate?).  His methodologically unsound Seduction of the Innocent remains a suitable bit of canonical drivel, stirring the agitated, not least of all his claim that the gay subtext of the Batman stories was harmful to youths.  It led to a panic that saw the creation of the Comics Code Authority and the eventual demise of EC Comics.

Since then, there has been a smattering of work on the gaming-violence causation business.  The Journal of Experimental Social Psychology ran a study in 2013 featuring participants engaged in playing violent or non-violent video games over 20 minutes per day over 3 days.  “As expected, aggressive behaviour and hostile expectations increased over days for violent game players, but not for nonviolent video game players, and the increase in aggressive behaviour was partially due to hostile expectations.”  That same year, another study published in Aggressive Behaviour found an exception: participants surveyed sowed that violence with a “prosocial motive (i.e. protecting a friend and furthering his nonviolent goals) were found to show lower short-term aggression”.

Research published this year by Andrew K. Przybylski of Oxford University and Netta Weinstein of Cardiff University, arguably gives us one of the most thorough bodies of work to date.  It surveyed 1,004 British 14-15-year-olds on gaming habits and behaviour, along with an equal number of carers.  “There was no evidence for a critical tipping point relating violent game engagement to aggressive behaviour.”  According to co-author Weinstein, “Our finding suggest that researcher biases might have influenced previous studies on this topic, and have distorted our understanding of the effects of video games.”

Even judges have opined from upon high on the issue, with the late Antonin Scalia observing in the 2011 case of Brown v Entertainment Merchant Association that psychological research studies, at least those being relied upon in that case, “do not prove that violent video games cause minors to act aggressively (which would at least be a beginning).”  The studies only showed “at best some correlation between exposure to violent entertainment and miniscule real-world effects”.

This does not prevent the prosecution from having a good stab at the futile.  Dozens of countries have access to violent games and do not see gamers running amok massacring all and sundry.  The issue is deeper, and the deeper part is what is problematic.  In this, progressives and conservatives find testy, shallow consensus, if in slightly different ways.  The video gamers are being accused of producing a star fashioned in ghoulish, murderous reality.