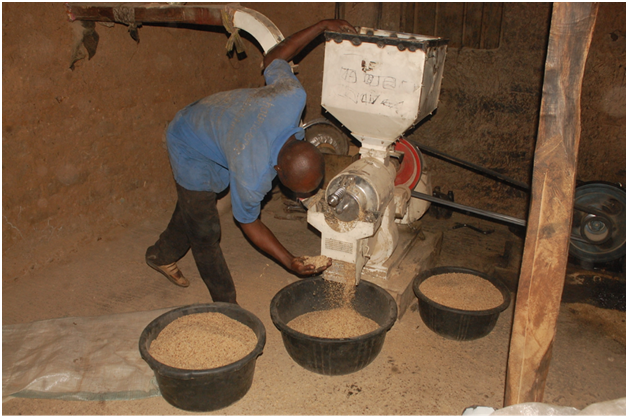 Sadly, throughout these years, they were completely depended on traditional farming, planting local varieties of the crop and ancient milling techniques a practice, which often resulted in low yields and profits.

During their rice parboiling process, the women soaked their paddies in water for several hours to soften the kernel, re-wash it again and steam it before sun drying. After this, the rice is milled with old machines that are unable to adequately remove stones and polish the grains.

This usually results in a substandard poor quality in comparison to the imported rice in the market, which sells for a lower amount.

Rice production has, however, been a major source of livelihood for people in Giwa Iganchi  Local Government Area of Kaduna State in Northern  Nigeria.

In late 2019, the Giwa Iganchi Commercial Maize F.C.S Rice Mill Enterprise was selected by SG 2000 and the Kaduna Agricultural Development Agency (KADA) to participate in the project that will transform the entire rice farming process and production.

Alliance for a Green Revolution in Africa (AGRA) -Kaduna State Consortium project in partnership with the Partnership for Inclusive Agricultural Transformation in Africa (PIATA) conducted trainings and the facilitated partnerships between the local communities and reputable rural agro-industrialists.

AGRA’s intervention in the production and milling process has greatly improved the entire rice value chain.

AGRA is however concerned with fulfilling the vision that Africa can feed itself and the world, transforming agriculture from a solitary struggle to survive to a business that thrives.

Farmers now make better choices with seed and practice modern farming. The introduction of high yielding rice varieties as well as modern milling machines and techniques has improved the milling enterprise in Giwa.

Abubakar, one of the beneficiaries of the trainings mentioned the new milling machine has brought a lot of benefits to them and they can now employ more people with the profits from the business.

Now, they are able to mill between 30-40 bags per day, resulting in a more finished product that is at the same standard as imported rice. This has created an opportunity for new markets while competing in local markets.

Abdulrahman who works at the mill, said the experience with the AGRA project was transformative,  the rice mill has brought about an increase in the production of high-quality finished products and an improvement in the standard of living.

He said, “my profit has improved, constant growth and I have been able to help employ more hands. As you can see, there are people carrying out different roles in the processing, chaff removal, operators and so on. The number of bags processed daily determines how much each is paid, usual between N1000- N1500 daily.”

The headquarters of the local government is in the town of Giwa. The council area has an area of 2,066 km2 and a population of 286,427 at the 2006 census. It has 11 electoral wards and two development area. It is located in the North-West of Kaduna State