The Ekiti State Governor and Chairman of the Peoples Democratic Party (PDP) Governors’ Forum, Mr Ayodele Fayose has cautioned the All Progressives Congress (APC) led federal government to be mindful on how it handles issues bordering on religion in the country so as not to throw the country into religious crisis, condemning attempt by armed men of the Department of State Services (DSS) to arrest  Apostle Johnson Suleiman of The Omega Fire Ministries Worldwide in Ado Ekiti, early today as uncalled for and clear invitation to chaos.
Governor Fayose, who challenged the security agencies in the country, especially the DSS to tell Nigerians how many of the Fulani herdsmen that killed thousands of Nigerians across the country have been arrested, added that;

Speaking through his Special Assistant on Public Communications and New Media, Lere Olayinka, Governor Fayose, who lamented that the APC led federal government, was indirectly supporting attack on Christians and other Muslim sects, especially the Shi’ites, by looking the other way while they are attacked, called on the international community to intervene before Nigeria is thrown into major religious crisis. 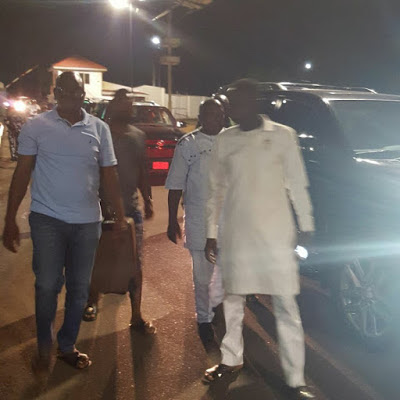 Governor Fayose, who expressed surprise that a man of God was been trailed to be arrested by the men of DSS said,  he expected the security operatives  to invite him if they have any issue with him instead of  arresting him in the dead of the night after a powerful and spirit-filled crusade in my State. He said;

“If the federal government had acted swiftly like it acted on Apostle Suleiman so-called inciting comments when people were being killed by herdsmen across the country, so many lives would have been saved.”

The governor described as strange, APC hatred for men of God, especially those seen as not on the same page with the party, saying; “It is on record that the APC in Ekiti State issued press statements and went on social media to disparage the Redeemed Christians Church of God (RCCG) Worldwide General Overseer, Pastor Enoch Adeboye just because he praised me when he came to Ekiti. And curiously, it was immediately Pastor Adeboye came to Ekiti State and praised me that he was forced to relinquish his position as the General Overseer of the RCCG.

“Apostle Johnson Suleiman openly condemned the killing of Nigerians across the country and went on to say that Christians should rise and defend themselves if the federal government, which controls all security apparatus will not defend them and the next thing that happened was the DSS moving swiftly to arrest him.

“Isn’t it ridiculous that instead of running after those herdsmen that have killed over 3,000 Nigerians in just one year, the DSS opted to arrest a man of God, who merely expressed his frustration on the inability of Nigeria to protect its citizens?

“Or who should be arrested between those killer herdsmen and Apostle Suleiman who merely expressed his readiness for self-defence and called on Christians to defend themselves if they are attacked by the herdsmen?

“We were all in this country when cattle breeders openly said over 1,000 Agatu people of Benue State were killed because over 10,000 cows were killed. We were also told that the Southern Kaduna genocide wasas a result of killing of cows. Up till today, none of those cattle breeders have been arrested.”

The governor, who said there could also be plan to arrest the General Overseer of Living Faith Church Worldwide International (Winners’ Chapel International), Bishop David Oyedepo, warned security operatives against intimidation and arrest of men of God in the interest of peace and religious harmony in the country.

He called for the release of the head of Nigeria’s Islamic Movement (IMN), Ibrahim El-Zakzaky, who has been in detention since late 2015 despite that the court ruled that he should be released, saying;

“I stand for Nigeria and its people, not for any religion and it is my position that rights of all Nigerians must be respected and protected.”

“I personally attended his crusade and I think it is wrong for a man of God who is harmless that could be invited if they have any issue against him. Are Christians and Moslems under different dispensation of the rule of law?  That’s why I went there to rescue him. Let them kill two of us together. But when they saw my vehicles and the crowd, they fled.

Governor Fayose noted that it was unbecoming of the Federal Government to be harassing the clergymen in the country noting that the General Overseer of Redeemed Christian Church of God (RCCG) Pastor Enoch Adeboye was harassed and forced to resign shortly after he visited him in Ado Ekiti.

“He said, “This is unacceptable, we are in a democracy and Nigerians should warn the Presidency against putting this country on fire because religion is an emotional thing.”